Besides serving as an attraction for children, the Central Zoo has also become a refuge for rescued endangered animals
Smriti Basnet 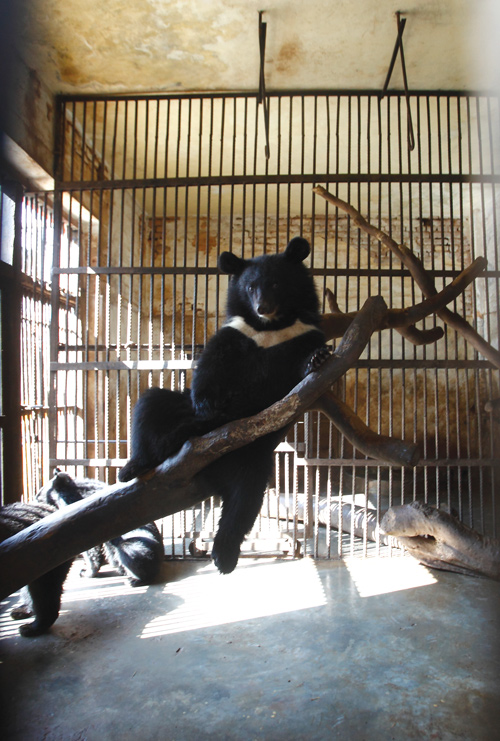 Gopen Rai
WILD AT HOME: Orphaned Himalayan Black Bear cubs rescued from the forests of western Nepal last May are now looked after at the Central Zoo in Jawalakhel.

Three Himalayan black bear cubs whose mothers were probably killed by poachers for their gall bladders to be sold in China as traditional medicine would have most certainly died had the rescued animals not been brought to the Central Zoo.

Two of the cubs were found in Doti and one in Jumla, and transported to Kathmandu in May last year when they were just two months old. The triplets had little chance of survival without their mothers, and without the specialised attention of vets at the zoo.

“Alone in the wild they would not have got the needed care and maybe the poachers would have got them,” said Ganesh Koirala, assistant curator at the Jawalakhel Zoo. Smugglers across the mountains are killing the endangered bears to take out their gall bladders, skin and paws for sale within Nepal and in China.

Fed six times a day, the cubs are now healthy and chubby and have become one of the most popular attractions at the Zoo. The Zoo is now serving as an important sanctuary for rescued endangered wildlife: a man-eating tiger darted and transported from Chitwan, rescued leopards, Eurasian owls, and more recently a pair of red panda cubs found and raised by a couple in Rolpa. 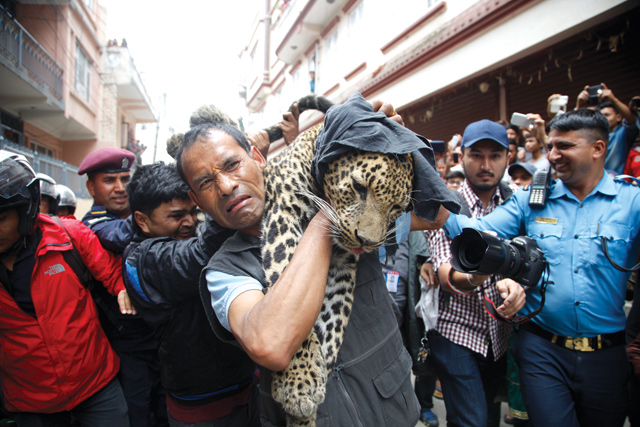 Gopen Rai
Zoo vet Radha Krishna Gharti carries a tranquilised leopard from a house in Kuleshwor to be translocated to Shivapuri National Park.

In the past year alone, 368 rescued animals have found their way to the Central Zoo, and this figure is almost double than a year before. Among them 148 were adopted by the Zoo, 133 were released back into the wild, and 87 died in the quarantine facility.

“We release them once we know they can make it out there, otherwise we usually keep injured or the ones we think cannot survive in the wild,” said Koirala.

While some animals are brought from various parts of the country, what keeps the zoo busy these days are rescue operations in Kathmandu itself — especially since wildlife like leopards have started straying into the city.

“Our job is like that of a policeman,” says Zoo vet Radha Krishna Gharti, “we try to bring them in here as soon as possible. If it’s really urgent then we give them first aid about half a kilometre away from the area of rescue.”

Gharti has already rescued three leopards since July, and his expertise in capturing the spotted big cats has earned him the title ‘Leopard Catcher’. A Mahindra pickup equipped with tranquilliser dart guns and nets is permanently on standby for Gharti and his rescue team.

The government has a plan to set up wildlife rescue centres near protected areas across the country, but till that happens the Central Zoo in Kathmandu will continue to be a refuge for rescued animals. 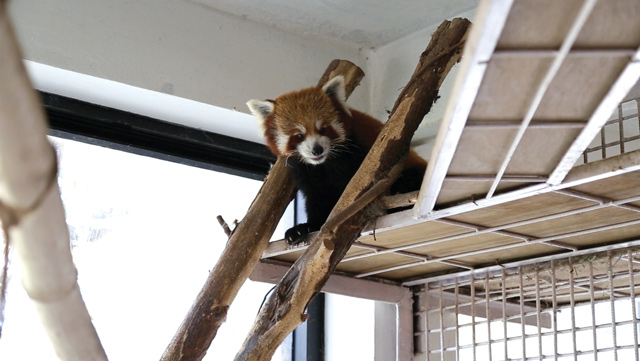 “The Zoo is having a difficult time coping with the overwhelming number of rescues,”  said Ghana S Gurung of World Wildlife Fund (WWF) Nepal. The Zoo is running out of space and is overcrowded.

There is a plan to transfer the bigger animals in the Zoo to a new 245 hectare facility in Surya Binayak, but the Zoo will have to manage the best it can till it opens.

“With a bigger zoo in Surya Binayak it will be easier to house rescued wildlife, and other animals will also have more space,” said Deputy Director General of Department of National Parks and Wildlife Conservation, Gopal Bhattarai.

The Surya Binayak site is being demarcated and levelled and will be designed to comply to modern zoo standards by providing animals space and vegetation much closer to their natural habitat.

“The zoo in Jawalakhel will be upgraded and continue with its conservation education programs,” explained Govinda Gajurel of National Trust for Nature Conservation (NTNC).

WWF’s Gurung believes bigger enclosures will be better to rehabilitate rescued animals and feels making it look like semi-natural habitats will contribute largely towards conservation education. He added: “For visitors, these semi-natural habitats as opposed to smaller cages is both visually appealing and can add to their understanding of the species.”

It’s a zoo out there, Hemlata Rai

It’s still a zoo out there, Sraddha Basnyat

Tourism is driven by fads. Last year it was Easter Island, this year it is Koh Samui. In Nepal itself, the flavour of the season is Dolpo.
PADAM GHALEY IN PHOKSUNDO
Wow! It namely likewise fine treatise about JavaScript, babyliss pro curler I dissimilar Your post doesn't acquaint any sense. ray ban outlet uk if information are defined surrounded sketches one can effortlessly be versed with these. hollister sale I think a visualized exhibit can be better subsequently simply a effortless text, chanel espadrilles for sale that why it gives you improved quality. getnjloan.com Can you amuse forward me the code for this script alternatively interest distinguish me surrounded detail among relation apt this script? Vivienne Westwood online get a babyliss perfect curl Very soon this network sheet longing be outstanding among all blog viewers, isabel marant sneakers saleI too prefer Flash,