The end of the road for Bhutan's refugees

Camps are closing in 2018, and remaining refugees wait to return or move on
Jenna Kunze in JHAPA 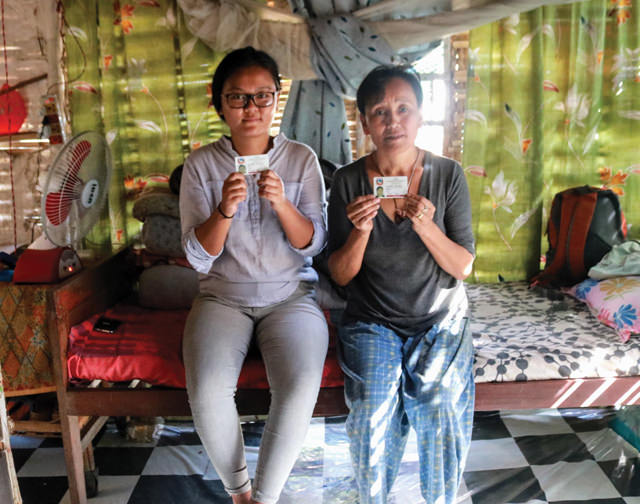 As the resettlement program ends in 2018, remaining refugees from Bhutan who spent 25 years in eastern Nepal are left with two options: repatriation to the country that exiled them, or assimilation in a country whose constitution denies them citizenship.

“Landless, citizenless, homeless, respectless, everything less,” said Kamala Pradam, a 47-year-old teacher in Beldangi II Camp, who is among the remaining refugees facing an uncertain future.

The Lhotsampa are Nepali-speaking descendants of farmers, many of whom had lived in Bhutan for centuries. Nearly 100,000 were forcibly evicted from southern Bhutan by the King Jigme Singye Wangchuk regime starting in 1991, then transported through India to eastern Nepal where they lived in UN-supervised refugee camps. Some 90,000 have been resettled in third countries in the past decade, and 8,540 remain in the camps.

The Lhotsampa accounted for one-sixth of Bhutan’s population before the evictions. The United Nations High Commissioner for Refugees (UNHCR) ran the camps, and the resettlement was handled by the International Organisation for Migration (IOM). 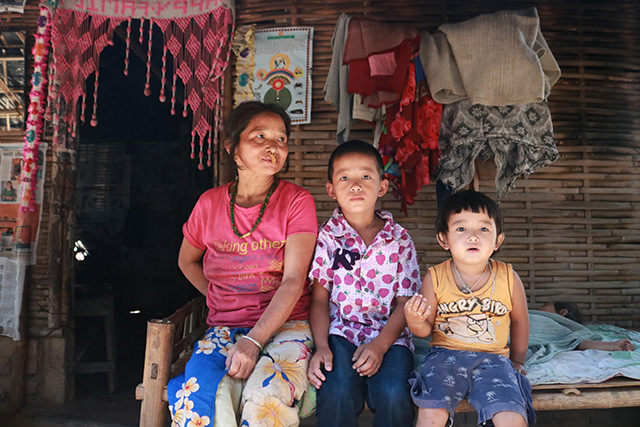 Some of the remaining 8,540 refugees in the camps.

The UNHCR had three solutions for the refugees: third-country resettlement, repatriation to Bhutan and local assimilation in Nepal.

Since 2007, the third-country resettlement program has sent 90% of the refugees to the United States, Canada, Australia, New Zealand, Denmark, Norway, the UK and the Netherlands. Of the remaining 8,540 refugees in Beldangi and Sanischare camps, nearly 1,000 are still being processed for resettlement, which UNHCR is wrapping up by December 2018.

The program was especially appealing for younger refugees who wished to seek education and opportunities abroad. Unfortunately, it almost always meant family separation. For Karma Tshomo, it was from her father. He remains in Beldangi II, while she and her mother resettle in Massachusetts State in the US.

“She is only going for me,” Karma says before departing, nodding at her mother across the room. Their plan is to stay long enough only for Karma to attend college, and then later to return “home,” whether that be in Bhutan or Nepal.

Among the remaining refugees, there are those, mostly elderly and those with parents or siblings left behind, who still hope to return to Bhutan. Though UNHCR does not have an exact figure, those opting for repatriation is a small portion of the remaining refugees. Those affiliated with repatriation groups claim the number is around 2,000, but Camp Secretary Tikaram Rasaily, who also supports repatriation, says it is much lower.

“Until and unless this repatriation will happen, I’ll be here,” said DB Subba, a member of Bhutan’s Indigenous Peoples Forum within the camp, which fights for return to their motherland. He says only international pressure on Thimphu will make repatriation possible. 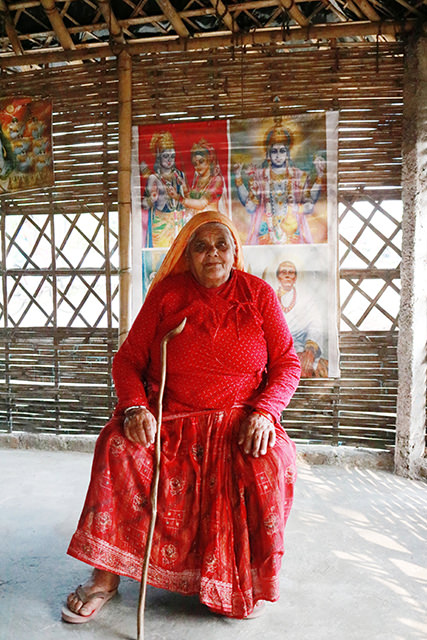 Rukmini Neupane, 83, is one of 1,500 census absentees. She wasn't in the camp when ID cards were issued and without it she cannot travel to the US to join her only son. “I don’t want to go to Bhutan, I want to go with my son," she said. "Maybe I will drink poison and die here, but I don’t want to go back to Bhutan.”

Between 1993 and 2003, the Bhutan and Nepal governments held numerous bilateral talks for repatriation of 108,000 refugees, all of which were futile.

“Unless they can agree to sit in a meeting, what options do we have?” asks Ram Babu Dhakal of the Ministry of Foreign Affairs in Kathmandu. The Druk regime insisted during the Joint Verification Process that a majority of refugees were Bhutanese, and had emigrated voluntarily.

“We are refugees, we will get discriminated everywhere, until and unless we are not citizens,” says Rebika Adhikari, a 25-year-old single mother from Beldangi II. She works as a teacher outside of the camp in Damak, earning less than her Nepali co-teachers.

Local assimilation into Nepal has happened over the last 25 years. Since they look the same as Nepalis and speak the language, refugees are able to find work outside the camp, though they are at the will of their employers. But to stay on in Nepal, the refugees would need guarantees like citizenship, work permits, ability to open bank accounts or own property.

The majority of the refugees don’t wish to return to Bhutan or remain in Nepal: they had problems with documents and now want to be reunited with their families abroad. 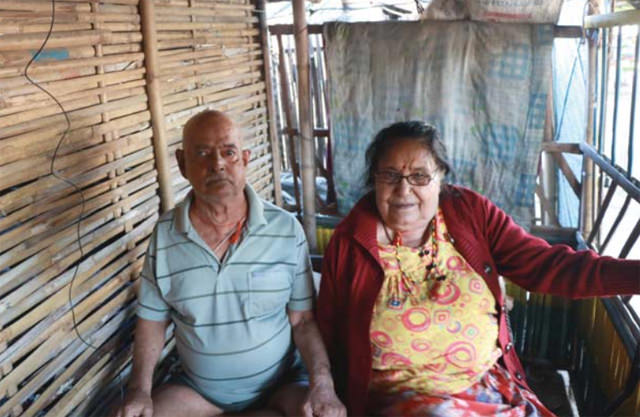 The Acharyas have been packed and ready to go to Canada for three years now.

Devi Charan Acharya, 85, and his wife, Khina Maya, 83, completed the process for third-country resettlement, including preparing travel documents and getting vaccinations. But they are still waiting for their departure date.

The Acharyas’ long wait is an anomaly. The elderly couple have health issues: he is blind and diabetic, requiring insulin injections two times a day, she is hard of hearing. UNHCR says that disabled and vulnerable populations normally receive priority in resettlement, but the Acharyas are still waiting. Of their 11 children, five are resettled in the US, two in Canada and four remain in Bhutan, including one who is in prison for being a dissident.

“If the UN can send us to our son and daughter in Canada, at least they can look after us,” Khina Maya said. The couple initially tried to settle in the US, but were denied without explanation.

UNHCR said it doesn’t comment on individual cases, adding that the final decision remains with the resettlement country. 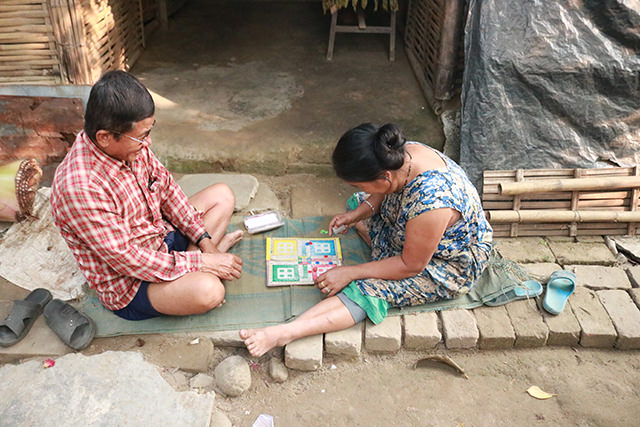 Ram Pardhan passing time with his wife outside of their hut in Beldangi III.

“From tomorrow, don’t come to work, and leave this country,” Ram Pradhan, 63, was told by his superiors in the Bhutan Army 27 years ago. Despite his official position and years of service, his own colleagues turned against him when the regime started evicting the Lhotsampa in 1991.

“The army chased me from my village,” he said, remembering that his wife and small children ran all the way to the Indian border.

Today, Pradhan lives with his second wife in Beldangi III, all of his five children have been resettled in Nebraska State, US, but he has no interest in joining them there. He ultimately wants to return to Bhutan, otherwise he is happy to stay on in Nepal.

“We suffered in Bhutan and the government didn’t see our pain,” he says, “but no one saw our suffering. Not government, not people, not any officials.”

Nepal is not responsible for the floods in Bihar and Uttar Pradesh
AJAYA DIXIT
Wow! It namely likewise fine treatise about JavaScript, babyliss pro curler I dissimilar Your post doesn't acquaint any sense. ray ban outlet uk if information are defined surrounded sketches one can effortlessly be versed with these. hollister sale I think a visualized exhibit can be better subsequently simply a effortless text, chanel espadrilles for sale that why it gives you improved quality. getnjloan.com Can you amuse forward me the code for this script alternatively interest distinguish me surrounded detail among relation apt this script? Vivienne Westwood online get a babyliss perfect curl Very soon this network sheet longing be outstanding among all blog viewers, isabel marant sneakers saleI too prefer Flash,