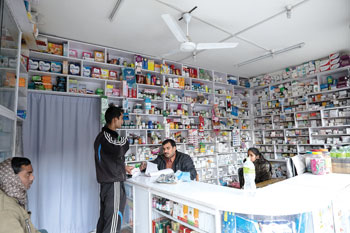 Global concern about antibiotic resistance, along with resistance itself, is at an all-time high. In 2014 the World Health Organisation(WHO) officially recognised the need for a Global Action Plan for antimicrobial resistance and will adopt it in 2015.

The UK’s Chief Medical Officer sounded the siren for all countries to address the problem. A report from Public Health England predicts that by 2050 antimicrobial resistance will cost up to $100 trillion and kill 10 million people around the world each year. Even the 2014 Longitude Prize challenge is about antibiotic resistance. Echoes have been heard across the world, but almost exclusively from wealthy countries.

Nepal is one of only a few developing countries to have assessed antibiotic resistance and the factors associated with it. The Global Antibiotic Resistance Partnership (GARP)-Nepal, with its secretariat at the Nepal Public Health Foundation, released a sobering analysis last month to an assembly of clinicians, public health specialists, microbiologists, veterinary experts and others.

The evidence base regarding the extent of antibiotic resistance in Nepal today is scant, but studies document high levels of resistance. In each of 10 recent studies of acute respiratory infections, more than half the cases analysed were resistant to first-line antibiotics. Most cases of bacterial diarrhoea were resistant to at least one drug in the four studies published since 2007, and one-third of cases in the largest study were resistant to the four top antibiotics for those bacteria. The story for bloodstream infections, sexually transmitted diseases and urinary tract infections was no better. The true picture may not be as bad as this evidence suggests because the studies were all done in hospitals, and on the sickest patients. Still, complacency is not an option.

Antibiotic resistance is evolution in action, a natural process that occurs in response to all antibiotic use. If use is reduced, however, as it has been in some European countries, effectiveness can return. This may mean that the current antibiotic pharmacopeia can be managed intelligently to maintain effective antibiotic coverage for decades.

The range of actions that can help to preserve antibiotic effectiveness surprised many attendees at the Kathmandu meeting. It is not only changes in hospital practice or by medical specialists that can help, but broadly, anything that reduces the need for antibiotics reduces antibiotic resistance. Vaccines that prevent bacterial diseases (and even viral diseases that are inappropriately treated with antibiotics or pave the way for bacterial infections) help. This includes vaccines that prevent pneumonia, diarrhoea, influenza and other common illnesses. Clean water and sewerage also reduces the burden of disease and the need for antibiotics.

Also largely unrecognised is the widespread use of antibiotics to prevent disease in poultry, cattle and other farm animals. Better sanitation on farms reduces the need for this. However, Nepal has no regulations governing antibiotics in animals, and farmers may not have the information they need to make the change.

Hospitals and healthcare workers are the front lines. Hospitals are notoriously dangerous places, and hospital-acquired infections are among the most resistant and are too often carried from patient to patient by the doctors and nurses treating them. Perhaps the cheapest and simplest intervention is also one of the most effective: hand washing between patients. Even in the best Nepali hospitals, hand cleansing between patients is not standard practice.

As for antibiotic prescribing, healthcare workers are as guilty as the self-prescribing public. Antibiotics are given ‘just in case’ for simple coughs and colds, or for diarrhoea that should be treated with oral rehydration.

Excess antibiotic use is clearly a problem everywhere, including Nepal. Calls for strict enforcement of ‘prescription-only’ laws may seem like one solution, but will this really serve the whole population? One of the characteristics that sets Nepal and other developing countries apart from wealthy countries is the co-existence of problems of excess and access.

In poor, remote areas of Nepal villagers may be far from clinics and have no choice but to purchase whatever antibiotics they think they need. Clearly, self-treatment with antibiotics purchased at a shop is not the desired long-term solution. Until the healthcare system extends good access to most of the population, solutions must be tailored to reality, even if that means that some antibiotics are freely available for purchase, at least in some places.

It is not enough for experts to know the facts about antibiotic resistance, that is why one of GARP-Nepal’s highest priorities is to develop curriculum and training materials for healthcare workers at all levels, both human and veterinary, in collaboration with professionals and policymakers.The first Antibiotic Awareness Week is planned in Nepal for November 2015 as part of a global campaign.

Some changes can be introduced directly by healthcare professionals and the public at large, but others require official policy changes, including some that will not be universally popular. We applaud the Minister of Health and Population for his engagement and concern.

GARP-Nepal is one of eight GARP partners in Asia and Africa, a network built by the US and India-based think tank, the Center for Disease Dynamics, Economics & Policy (CDDEP). GARP-Nepal is committed over the long term to helping all sectors understand antibiotic resistance in all its facets, and to proposing solutions that will make Nepal a healthier place for all. In collaboration with government and private sectors, it also gives Nepal a voice in the ongoing global discussions and a leadership role among developing countries in confronting antibiotic resistance.

Buddha Basnyat is Chair of GARP-Nepal and Hellen Gelband is Associate Director at the Center for Disease Dynamics, Economics and Policy