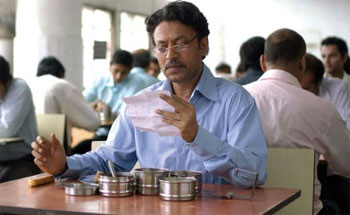 One day a young woman called Ila (played by the unassuming and lovely Nimrat Kaur) sends a traditional stacked lunchbox, or dabba (as they are called in India), to her uninterested husband at his workplace. Taking advice from the Auntie upstairs (a never seen but hilariously opinionated elderly neighbour), she has prepared a special recipe and hopes to cook her way into her husband’s heart.

The lunchbox goes astray and so begins a quiet but captivating film about a rather unorthodox epistolary relationship between Ila and the receiver of her deliciously cooked meals, delivered by way of the famous dabbawalas of Mumbai.

It is hard to believe that such a subtle, deeply sophisticated film is the work of a debutant, and yet it is indeed Ritesh Batra’s first film. Just as impressive is that Batra managed to convince the peerless Irrfan Khan to play the slightly surly, uncommunicative, about-to-retire accountant who accidentally receives Ila’s fragrant meals.

As Khan’s character (whose name is revealed via a thoroughly tongue in cheek scene at Ila’s apartment) learns to appreciate the gift lunches, he and Ila strike up an exchange of notes that initially begin with banalities like “the food was too salty today,” and progress to candid exchanges about their lives and dreams.

It is not difficult to believe that the poor neglected Ila would succumb to cooking meals for a complete stranger, especially after we see her meager interactions with Rajiv, the thoughtless and possibly unfaithful husband. As for Irrfan Khan’s character, a widower who has reconciled himself to accepting his loneliness, Ila is a beacon of all that is thoughtful and generous.

This is not a film about grand gestures, destiny, or even “true romance” as we have come to know it through mainstream cinema. Instead this wonderful story deals with the minutiae of life that makes it worth living – the small kind acts, the home-cooked meals, the everyday jokes, the appreciation of the people who truly care for you.

As Ila and her new friend slowly find their way towards each other, you wonder, as so often happens in real life, if they will actually miss each other because of the debris that surrounds them – their pasts, their duties, their own crippling fears.

Beautifully observed and filmed in a Mumbai rarely seen in Bollywood films, The Lunchbox is one of the most enchanting films I’ve seen in a long while. It is no wonder that when it premiered at Cannes in 2013 it won the Critics Week Viewer’s Choice award.

The Lunchbox is now available on DVD with English subtitles.

Cloudscapes of the mind

Dont forget to look up at the post-monsoon extravaganza in the sky above you
Wow! It namely likewise fine treatise about JavaScript, babyliss pro curler I dissimilar Your post doesn't acquaint any sense. ray ban outlet uk if information are defined surrounded sketches one can effortlessly be versed with these. hollister sale I think a visualized exhibit can be better subsequently simply a effortless text, chanel espadrilles for sale that why it gives you improved quality. getnjloan.com Can you amuse forward me the code for this script alternatively interest distinguish me surrounded detail among relation apt this script? Vivienne Westwood online get a babyliss perfect curl Very soon this network sheet longing be outstanding among all blog viewers, isabel marant sneakers saleI too prefer Flash,