What could have been a perfectly fine film is a bit of a bore.
Sophia Pande 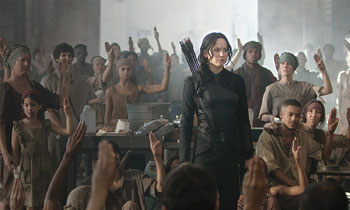 At the end of The Hunger Games: Catching Fire (2013), our plucky heroine Katniss Everdeen (Jennifer Lawrence) shoots an arrow into the force-field, setting the infamous arena in flames, thus putting an abrupt end to the festivities and effectively making herself public enemy number one to the nefarious Capitol, in particular to President Snow (Donald Sutherland), who bombs District 12 to smithereens in response to Katniss’s rebellion.

As Katniss wakes up in District 13’s underground city at the end of that second installment of the Hunger Games films, she realises that her friend and partner in the games, Peeta Mellark (Josh Hutcherson), has been left behind because of a lapse in the intricate plan by Haymitch Abernathy (Woody Harrelson), Katniss’s mentor and former Hunger Games victor, and Plutarch Heavensbee (the late, great Philip Seymour Hoffman), a former head gamekeeper turned leader of the rebellion, to liberate the participants from the indescribably cruel games – an annual happening devised by the Capitol to keep all uprisings in the 12 Districts at bay through fear and intimidation.

If you are unfamiliar with the premise of these young adult novels turned blockbuster films, I suggest you read the rather good books first, page-turners indeed, which, in contrast to the usual vapid teen stuff (think the Twilight series written by Stephenie Meyer), sets its story, very firmly with social context, in a dystopian post apocalyptic world where people are treated according to their proximity to the rich, frivolous Capitol, with District 1 being the closest.

While the novels, written by Suzanne Collins, number three in total, Hollywood as per usual has decided to protract its money making spree by turning Mockingjay into two parts, effectively robbing this film of its real purpose: a conclusion. As a result, what could have been a perfectly fine film is a bit of a bore, lacking action, and an impetus, even while it develops Katniss’s character, justifying her evolution into the “Mockingjay” – a symbol for the rebellion against the Capitol.

I have been a fan of the books and the past two films, applauding the casting, and the intentions, but will say, frankly, that I am disappointed with this last installment. While decent enough, it is not riveting like the former films, partly because of its absence of focus, and the lack of spark usually derived from the friendship between Katniss and Peeta, a murky relationship that hovers between friendship and romance.

The books offer real, intense, social, political and personal drama. The films have gone wrong in prolonging all three elements. Still, with Jennifer Lawrence at the helm (supported by a cast including the likes of Hoffman, Julianne Moore, and many others) it’s hard to fall too far short.

Looking for my brother

Little did we know that only 2-3 km away Kanak was spending his third night out in the open, drinking rain, talking to wild animals to keep them away, and esperately anchoring himself on rocks so that he would not slip off the ledge to the river below.
KUNDA DIXIT

Nepalis can soon start collecting their reward for not polluting the earth
NAVIN SINGH KHADKA
Wow! It namely likewise fine treatise about JavaScript, babyliss pro curler I dissimilar Your post doesn't acquaint any sense. ray ban outlet uk if information are defined surrounded sketches one can effortlessly be versed with these. hollister sale I think a visualized exhibit can be better subsequently simply a effortless text, chanel espadrilles for sale that why it gives you improved quality. getnjloan.com Can you amuse forward me the code for this script alternatively interest distinguish me surrounded detail among relation apt this script? Vivienne Westwood online get a babyliss perfect curl Very soon this network sheet longing be outstanding among all blog viewers, isabel marant sneakers saleI too prefer Flash,