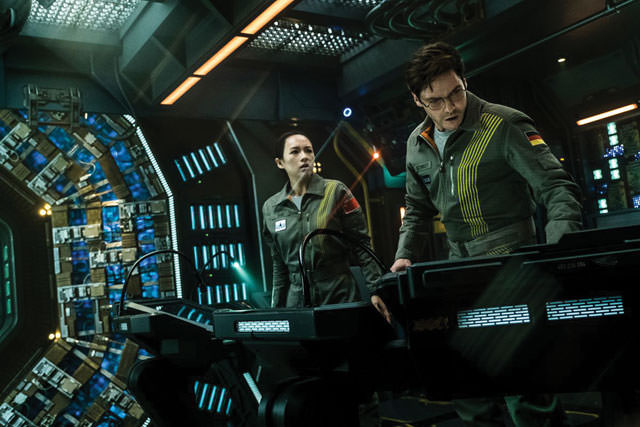 For sci-fans, there is nothing better than the equivalent of a locked room mystery in space: the classic spaceship lost in space trope that encloses a crew full of stressed out scientists trying to get out of the ship, away from the monsters inside, away from their worst selves, out of an alternate universe, and back home to their loved ones who they talk to fondly on giant screens.

J  J Abrams’s latest production, and third, but entirely stand-alone, installment of the Cloverfield films, The Cloverfield Paradox is a classic, watchable, thrilling, imperfect but enjoyable example of this type of sci-fiction that thrills you using the void of space as the main antagonist.

While the preceding two Cloverfield films (2008, 2016) have not really interested me (they are based on behemoth, terrifying creatures taking over the earth, but both have gimmicks which I cannot revel for fear of totally spoiling your thrills), this one, just released on Netflix in an hitherto unheard of kind of deal between Netflix and Paramount, caught my eye, and kept me fairly enthralled through its brief but intense, action packed 102 minutes.

Based on the already much used premise that the Earth is running out of fuel, a team of scientists must stay in space on the Cloverfield, a spaceship designed to hold the Shepard particle accelerator that is being tested for the first time, but is far too powerful to try out on earth; if it were to work, it would provide our planet with an infinite amount of energy. Two years later, Ava Hamilton (played by the wonderful Gugu Mbatha-Raw) and her crew are still stuck in space racing against time (the Earth is on the brink of war over fuel), to get the Shepard to produce a stable beam.

With an ensemble cast that includes David Oyelowo, Zhang Ziyi, and Elizabeth Debicki, the Cloverfield jumps into an alternate reality – in essence the titular Cloverfield Paradox, and experiences some of the creepiest happenings I’ve seen yet on cinema.

Equipped with gore, horror, thrills, secrets, and mysteries,the film never bores, even while the decision to release on Netflix instead of in theaters was reportedly prompted by fears of box office failure. However, despite these misgivings, this is a perfectly fine film about the horrors of space and the abuse of science and technology, packaged in a sleek looking film inhabited by some pretty amazing characters, each of whom managed to convey a distinct personality due to the innate talent of the actors.

While the cinemas provide little entertainment and as the Western world gears up for its usually empty awards season, you can entertain yourself, and maybe scare yourself a bit silly with this little, delectable piece of science fiction madness – designed to keep you hooked for the next Cloverfield film.

Ups and downs in Nepal

A trekker ambassador sees the need to be patient
Wow! It namely likewise fine treatise about JavaScript, babyliss pro curler I dissimilar Your post doesn't acquaint any sense. ray ban outlet uk if information are defined surrounded sketches one can effortlessly be versed with these. hollister sale I think a visualized exhibit can be better subsequently simply a effortless text, chanel espadrilles for sale that why it gives you improved quality. getnjloan.com Can you amuse forward me the code for this script alternatively interest distinguish me surrounded detail among relation apt this script? Vivienne Westwood online get a babyliss perfect curl Very soon this network sheet longing be outstanding among all blog viewers, isabel marant sneakers saleI too prefer Flash,