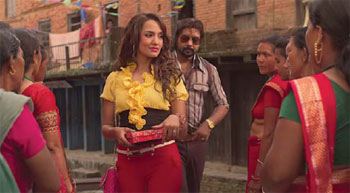 It has been a long time since I saw a Nepali film that didn’t jar me right out of the reverie that a well-made film is supposed to keep you in. I am speaking of perfect sound mixes, smooth cinematography with uniform lighting, harmonious shot compositions, believable dialogue, spot on editing, and a musical score that complements the visuals rather than overwhelms them. Suntali has all of these sophistications, which believe me, for a first time feature length director, is not a small achievement.

Director Bhaskar Dhungana’s black comedy is, therefore, a real pleasure to watch with moments of true hilarity even while the social commentary remains sharp and true to village life in Nepal. The story is simple enough, though close examination of the script written by Prawin Adhikari shows careful attention to detail and a real understanding of the minutiae of both village life and knowledge of the colloquialisms we use when speaking to each other. Most Nepali films in the past have fallen prey to the use of awkward formalities in their dialogues that weigh down their typically melodramatic plots.

Suntali starts with a long but very charming introduction, voiced by Madan Krishna Shrestha, that details the quirky characters of the village set high up in the hills on a ridge (filmed in the real life Newari town of Bandipur). The village is ruled by a formidable matriarch, Chinmaya Subedarni (Suryamala Khanal) and her rather unfortunate son Sundar (Karma) with an iron fist. When she arranges an engagement ceremony for Sundar with the toothy daughter of a well-to-do bureaucrat she expects all to go well, an expectation that is dashed to bits with the entrance of Suntali (Priyanka Karki) – a cheeky, pretty, young woman who arrives in the middle of the auspicious proceedings with a seedy husband, aptly named Bajrang (Pramod Bajrahari), in tow.

Suntali flips her hair in slow motion as she arrives dressed in her hot pants with her coiffed hair, calls Chinmaya “auntie”, and dares to try and feed her some mithai from a box she bears flirtatiously in front of her very attractive torso. This is pretty much when all hell breaks loose in the village, with all the men swooning over Suntali as she manipulates them to do her bidding. Deep, dark, very ugly secrets are revealed. People’s inner most desires get exposed in wittily conceived flashbacks (I won’t spoil these for you by describing them), and most of the jokes elicit belly laughs, though some do fall short partly because they are oft repeated.

Aside from the slow pace and the relatively clever person’s ability to guess at the plot fairly easily, Suntali is quite the pleasure for those of us who have cringed in the theaters while watching Nepali films in the past.

At this rate, there will be no more investment in Nepal
RAMESWOR BOHARA
Wow! It namely likewise fine treatise about JavaScript, babyliss pro curler I dissimilar Your post doesn't acquaint any sense. ray ban outlet uk if information are defined surrounded sketches one can effortlessly be versed with these. hollister sale I think a visualized exhibit can be better subsequently simply a effortless text, chanel espadrilles for sale that why it gives you improved quality. getnjloan.com Can you amuse forward me the code for this script alternatively interest distinguish me surrounded detail among relation apt this script? Vivienne Westwood online get a babyliss perfect curl Very soon this network sheet longing be outstanding among all blog viewers, isabel marant sneakers saleI too prefer Flash,