Beautifully shot, and poignantly scored, Sherpa is an important film for the world
Sophia Pande 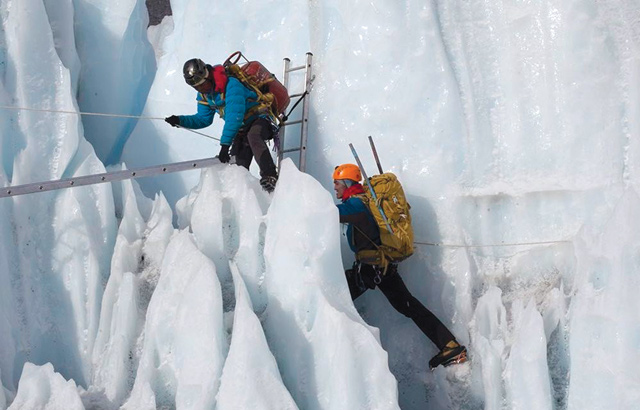 This year two quite different films have emerged about the highest mountain in the world, the first being – Everest, a Hollywood blockbuster based on Jon Krakauer’s best seller Into Thin Air, the other – Sherpa, a carefully balanced documentary piece by Jennifer Peedom – an Australian film-maker who wanted to focus on the Sherpa people who are so often by-passed in the visual depictions of the journey to the top.

Peedom set out to make Sherpa in the spring of 2014, heading to Everest Base Camp with her crew, and her main character, Phurba Tashi, a Sherpa climber who is about to attempt a record-breaking 22nd summiting of Everest. Her documentary was to be made in the wake of a nasty brawl between three European alpinists and Sherpa guides last year which shocked the climbing community worldwide.

For years, there has been pushback against the misuse; some may call it exploitation of the Sherpa people who have become the backbone behind the climbing of Everest. There has also been heavy criticism of the hubris surrounding a certain culture of climbing – where people are willing to pay tens of thousands of dollars for the privilege of summiting the world’s highest peak. These large sums of money are paid to the expedition operators in addition to the royalty of $11,000 that each individual climber must pay to the Nepali government for a climbing permit. The Sherpa community and the Solukhumbu region receive none of the direct benefits of this money.

Sherpa engages directly with the issues surrounding the avalanche that took the lives of 16 Sherpa guides, a catastrophic event that Peedom and her team were unfortunately in exactly the right place to document. The messy aftermath and the nebulous politics make for the emotional crux of the documentary as climbers who have paid to summit struggle against the outraged Sherpa community who seize the tragedy as a chance to forcefully lobby the government to provide them with adequate compensation for loss of life on Everest.

Beautifully shot, and poignantly scored, Sherpa is an important film for the world. It is a film that attempts to sum up all of the different grievances and viewpoints on the mountain in a fair manner.

Unfortunately, some issues are far too complex to elucidate even with a feature length documentary. While the world may come away from Sherpa (rightly) feeling as if it has learnt a great deal about cultural clashes, those who have followed these disputes minutely will still find themselves struggling to understand what exactly happened on the mountain during these fateful events; there are no clear heroes or bad guys (except aside from the woefully inept Nepali government) - just flawed human beings with egos and wants, manifesting sometimes in the worst possible human behaviour.

"Not enough is being done."

How did we end up paying $180 million for building a dam that should have cost only $130 million?
NAVIN SINGH KHADKA

The circle of events seems to be tightening
MARCUS MOENCH
Wow! It namely likewise fine treatise about JavaScript, babyliss pro curler I dissimilar Your post doesn't acquaint any sense. ray ban outlet uk if information are defined surrounded sketches one can effortlessly be versed with these. hollister sale I think a visualized exhibit can be better subsequently simply a effortless text, chanel espadrilles for sale that why it gives you improved quality. getnjloan.com Can you amuse forward me the code for this script alternatively interest distinguish me surrounded detail among relation apt this script? Vivienne Westwood online get a babyliss perfect curl Very soon this network sheet longing be outstanding among all blog viewers, isabel marant sneakers saleI too prefer Flash,