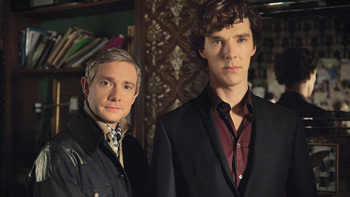 Flatmate wanted: must share bathrooms, living rooms, kitchens, mailboxes, and landlady’s prying. You may find your laptop’s battery drained and IP tracked. Violent criminals may send you text messages and or lock you in their cross-hairs, mistaking you for yours truly.

Such is the volatile but minutely analysed world of 221B, Baker Street, where army doctor John Watson (played by Martin Freeman of The Office and The Hobbit fame) moves in as he seeks a sense of belonging in his solitary civilian life. Watson has tried everything from therapy to blogging but can’t keep his mind off the war. If he’s looking forward to friendly chitchat, however, Watson is severely mistaken.

In the BBC’s hit series Sherlock, Benedict Cumberbatch’s Holmes is so addicted to crime scenes and morgue visits, he has no need of friendship and isn’t interested in conversation. Frequently invited to help police investigate cases, Holmes doesn’t miss a chance to belittle their inefficiency and condescendingly provides leads that ultimately lead to the crime being solved. When Holmes explains why a serial killer made mistakes (“The frailty of genius is that it needs an audience”) the audience can only smile guiltily because it applies to him, too.

As Holmes solves one case after another with consummate ease, he finally comes face to face with an equal nemesis and this is when things begin to get really interesting. Obsessed with crushing Holmes by any means possible, provided Holmes admits defeat, Jim Moriarty (not the former US ambassador to Nepal) is brought to life on television with such vileness that Arthur Conan Doyle’s description of Moriarty, through Watson’s reportage, seems bland. Also expunged are Holmes’s cape, pipe, and hunting hat.

This 21st century Sherlock takes place in an era of smartphones and smartbombs, and digital manipulation is the norm. And in contrast with Doyle’s moody detective, Sherlock here is a nasty, almost vampire-like mad genius who wears nicotine patches and suffers no fools.

In choosing from 56 Sherlock Holmes novels and stories, it’s not as if there is a dearth of material for those involved in this BBC makeover. However, credit must be given to the writers for preserving the persona and charisma of Arthur Conan Doyle’s hero, while also keeping abreast of technological advances. Never has Sherlock Holmes’s implausible befuddling of our senses seemed so tangible and probable.

Sherlock only has three episodes per season, which means dialogue and plot are taut and fresh, and only recently announcements were made that a new season will be aired next year. Running at 90 minutes, each episode would qualify as a standalone film if all of them weren’t so similar in style.

Rajdhani, 15 November
Wow! It namely likewise fine treatise about JavaScript, babyliss pro curler I dissimilar Your post doesn't acquaint any sense. ray ban outlet uk if information are defined surrounded sketches one can effortlessly be versed with these. hollister sale I think a visualized exhibit can be better subsequently simply a effortless text, chanel espadrilles for sale that why it gives you improved quality. getnjloan.com Can you amuse forward me the code for this script alternatively interest distinguish me surrounded detail among relation apt this script? Vivienne Westwood online get a babyliss perfect curl Very soon this network sheet longing be outstanding among all blog viewers, isabel marant sneakers saleI too prefer Flash,