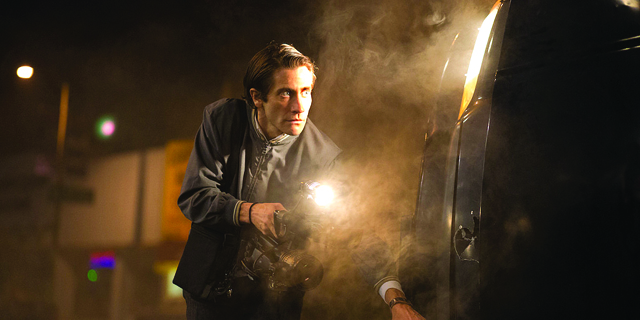 "Who am I? I’m a hard worker, I set high goals and I’ve been told that I’m persistent.” This is one of Louis Bloom’s earliest lines in Dan Gilroy’s Nightcrawler that premiered last year at the Toronto International Film Festival. This nocturnal thriller stars Jake Gyllenhaal as Louis Bloom, a relentless, charming and invasive cameraman who navigates the seedy world of Los Angeles’ crime journalism. Gyllenhaal’s grisly performance in Nightcrawler is his best yet.

We first meet Bloom stealing copper wire from an abandoned construction site. When confronted by a security guard, Bloom attacks him and steals the guard’s watch before leaving with the rest of the stolen material. To make a bit of money, he sells the wire to the foreman of a scrap yard and asks him if he is hiring. The foreman accepts the stolen scraps but refuses to give Bloom a job, stating that he does not hire thieves. On his way home, Bloom witnesses a car accident being filmed by a cameraman named Joe Loder (Bill Paxton) who he discovers is a stringer, a freelancer who sells footage to local news channels. Upon approaching Loder to ask if his footage will air on television, Loder give Bloom the famous line: “If it bleeds, it leads”.

Feeling inspired, Bloom trades a stolen bicycle for a police scanner and a dilapidated camcorder in order to kickstart his own career as a stringer. Bloom is uninhibited in his reporting and is completely void of all ethical constraints. This is what makes him so corrupt but also so successful. He is meticulous and dedicated to the craft, ignoring all those who question the morality of his actions. In fact, when his assistant Rick (Riz Ahmed) voices his concern about the integrity of their reporting, Bloom threatens to fire him. On the other hand, desperate local news producer Nina Romina (played by Rene Russo, Gilroy’s wife) encourages Bloom’s sleazy behaviour, believing that violent footage will drive up her show’s ratings by giving her audience something they “can’t turn away from”.

Bloom’s hunger for gory content manifests itself in his physical appearance as a gaunt figure whose eyes appear to be bulging out of his head for most of the movie. Known for testing the extremes of his physicality for roles, Gyllenhaal shed thirty pounds to better depict Bloom as a hungry scavenger. While Gyllenhaal’s appearance in the film is certainly unsettling it is not the most terrifying part of the film. What is even creepier is the way Gilroy manages to attribute a certain harrowing innocence to Bloom.The most alarming and uncomfortable aspect of Nightcrawler is that the audience actually begins to sympathise with Bloom as a polite, charming, self-starter who is simply trying to make ends meet anyway he can.

Gilroy’s script is so outstanding and Gyllenhaal’s performance so impressive that by the end of the movie you will find yourself nauseated by the fondness we’ve developed for Bloom’s character.