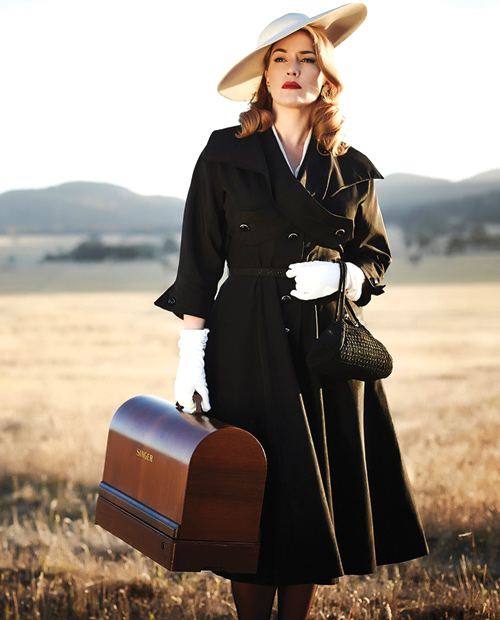 Kate Winslet glows in her starring role as a woman bent on revenge in The Dressmaker, a funny, weird, hybrid of a film that is part Western, part romance, and mostly black comedy.  Winslet plays the role of Myrtle ‘Tilly’ Dunnage, a headstrong, talented, independent woman who returns to her hometown of Dungatar — a small town that is populated by vivid characters with often petty mindsets — to take care of her mother, the mentally unstable Molly (played wonderfully by the great Judy Davis).   But Tilly’s return, twenty-five years after her hasty departure as a child (she was shipped off to boarding school), is also motivated by her need to figure out the exact circumstances under which she was so ignominiously shoved out, a situation that subsequently resulted in a great deal of mental trauma for herself and Molly.   Slowly, over the course of the film that is based on a novel by Rosalie Ham and set in the 1950s, we learn that Tilly believes she is responsible for the death of Stewart Pettyman (Rory Potter), her classmate in school and a nasty bully who died under shady circumstances. Stewart’s father, the equally nasty town councillor Evan Pettyman (Shane Bourne), forces Tilly to be removed from her mother — a command that is reluctantly carried out by the kindly but powerless local police sergeant Horatio Farrat (Hugo Weaving).   Tilly sets out to make trouble and to figure out the truth, determined to make the townspeople pay for their unkindness to her as a child and their continued apathy towards her mother Molly, who with Tilly’s care begins to slowly recover her caustic wit and the idiosyncrasies that made her the outcast in the face of insular conventions.

Tilly’s plan is simple: she means to make a living by sewing couture dresses for the women, thereby winning them over even as she sets the town on its head as the women begin to abandon their frumpy frontier clothing for the delectable creations made by Tilly’s magical hands — a skill she acquired partly from Molly, a talented seamstress herself, and partly from being trained in Paris after boarding school, by the likes of Vionnet.

Slowly, as Tilly begins to get at the truth, other deeply nasty secrets are revealed, she falls in love (who wouldn’t?) with the handsome Teddy McSwiney (Liam Hemsworth), Molly becomes more coherent (in other words, her formidable self), Sergeant Farrat, inspired by Tilly’s wondrous creations, reveals himself as a closet (pardon the pun) cross-dresser, and gradually the town becomes a better version of itself.

Directed by Jocelyn Moorhouse, this Australian production was an enormous hit Down Under — and it will make you smile, with its wit and the lively performances by the truly stellar cast. The film, however, despite all its light moments is an indelible commentary on the cruelty and despair that small-mindedness can spawn, and is a lesson in human resilience and the courage that is necessary to overcome the viciousness that can be wreaked upon people by the hateful few.

The next big thing

Welcome to the joys of moving with your fingertips.
MUKUL HUMAGAIN

No exit for Indosuez?

Credit Agricole is by now so sick of legal tangles in Nepal, it is getting ready to pack its bags and go.
BINOD BHATTARAI
Wow! It namely likewise fine treatise about JavaScript, babyliss pro curler I dissimilar Your post doesn't acquaint any sense. ray ban outlet uk if information are defined surrounded sketches one can effortlessly be versed with these. hollister sale I think a visualized exhibit can be better subsequently simply a effortless text, chanel espadrilles for sale that why it gives you improved quality. getnjloan.com Can you amuse forward me the code for this script alternatively interest distinguish me surrounded detail among relation apt this script? Vivienne Westwood online get a babyliss perfect curl Very soon this network sheet longing be outstanding among all blog viewers, isabel marant sneakers saleI too prefer Flash,