Pride and Prejudice and Zombies

For those who enjoy a good old mash-up and plenty of tongue-in-cheek.
Sophia Pande 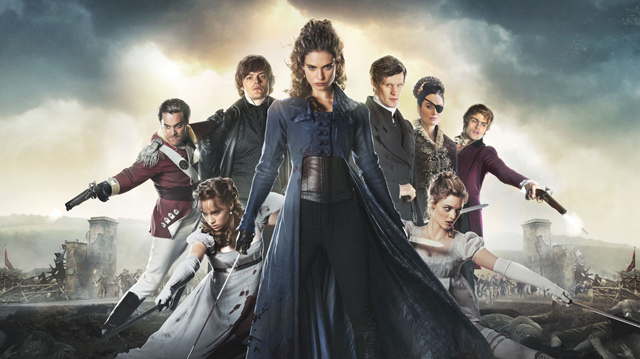 It is a testament to Jane Austen’s enduring popularity that almost two hundred years after her death, her novels continue to be used for various film adaptations including, most astonishingly in 2009, a pulpy parody titled Pride and Prejudice and Zombies — a book that even this reviewer could not get through. The fluffy, forced commandeering of Jane Austen’s elegant prose, spiking her wit with heavy-handed, clumsy double entendres that are a bludgeon over the head, make it impossible to read through this unlikely version of a beloved story laced with a plethora of zombies rampaging through 19th-century England.

It was, therefore, quite a surprise to hear that Pride and Prejudice and Zombies was to become a film, and that too with a decent cast, starring no less than the lovely, charming Lily James as Elizabeth Bennet.

While the film is to be approached by only those with a high tolerance for the absurd and a real love for Austen’s characters, this adaptation is surprisingly enjoyable (note: I did not say it is good). For those who enjoy a good old mash-up and plenty of tongue-in-cheek, well, this might just be your cup of tea.

The plot is essentially the same except that the Bennet sisters, instead of being trained as young ladies, are experts in the martial arts, specifically famed throughout their region as zombie killers. When Mr. Darcy (Sam Riley), another famed zombie killer, comes to town to look over the lay of the land (Britain is besieged by zombies and is just holding them in check at various key points), the fun begins, and the familiar courtship between the witty, strong-willed Elizabeth, and the proud, haughty Fitzwilliam Darcy begins — but this time, in addition to admiring Elizabeth’s mind, Mr. Darcy also admires her ability to off nasty automatons with skill, efficiency, and grace.

If all of this sounds absolutely preposterous, ruminate on whether you would like a romantic comedy infused with action and a healthy dose of science fiction-fantasy, gilded with high production values, and hybrid costumes that work surprisingly well. Also, some well-known character arcs have been slightly altered to confound expectations — the formidable Lady Catherine de Bourgh (played by the great and gorgeous Lena Headey) gives us a nice surprise with an about-face later on in the film, and the sleazy Wickham (Jack Huston) yields an even nastier secret.

Personally speaking, I enjoyed Pride and Prejudice and Zombies because of my own propensity for certain types of nonsensical fun, but I will warn that many people may find this film intolerable. For those with a higher threshold and a bit of imagination though, this can be a thoroughly enjoyable waste of time.