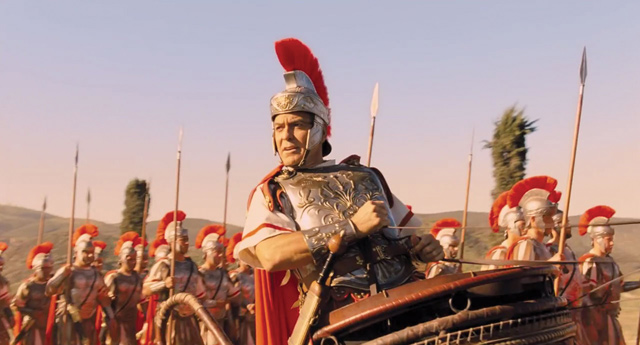 The Coen Brothers, Joel and Ethan, have, for the last three decades, made numerous films — good ones, decent ones and brilliant ones — spanning a number of genres, but always excelling in the particularly tricky field that is black comedy.

With their latest, Hail, Caesar!, the brothers embark on yet another tongue-in-cheek vintage Coen product, picking the bygone era of the Hollywood Studio system to poke fun at. The result is a pretty hilarious escapade involving a lost actor — the famous, feckless Baird Whitlock (George Clooney) — who is kidnapped by privileged communists (the film is set in 1951, during the Cold War), just as the studio system is about to cede its monopoly in Hollywood.

Eddie Mannix ([Josh Brolin](http://www.imdb.com/name/nm0000982/?ref=fnalnm1 ])), the head of all productions at Capital Pictures, stars as the ultimate fixer as he tries to locate the whereabouts of Whitlock, who is famous for his simultaneous womanising and going on days-long benders. We witness firsthand, through a wry comic lens, the struggles of Mannix,the pivot on which the studio runs, as he finagles his recalcitrant stars, confesses his ethical quandary to his priest as he lies to his wife about his smoking, spins juicy stories about the aforementioned stars to cover up their sordid messes, and does the manhandling required to keep famous people and multiple productions on track.

To add to the mostly inane fun, there are cameos by Tilda Swinton playing two identical twins, the bloody-minded tabloid journalists Thora and Thessally Thacker, Channing Tatum as Burt Gurney, a tap-dancing star with a nefarious agenda, and the likes of Jonah Hill, Ralph Fiennes, and Frances McDormand (the wife of Joel Coen) in roles that are as slyly mischievous as it gets with the Coens at the helm.

Over the course of this funny, beautifully shot, often delightful film there are often moments of puzzling loopholes — wild goose chases, even — that are characteristic of the Coens’ idiosyncrasies. There is an entire plot involving Scarlett Johansson as a flighty film star that really does not fit, but is remarkably entertaining nonetheless.

For the lovers of Miller’s Crossing, there is no bittersweet love story for you here, but if you revelled in the goofiness of O Brother, Where Art Thou (2000), well, Hail, Caesar! will probably crack you up just as much, as you nostalgically remember Clooney’s more memorable turn as a convict–turned–blues star in that other Coen classic.

An art form with a very long shelf life
AARTI BASNYAT
Wow! It namely likewise fine treatise about JavaScript, babyliss pro curler I dissimilar Your post doesn't acquaint any sense. ray ban outlet uk if information are defined surrounded sketches one can effortlessly be versed with these. hollister sale I think a visualized exhibit can be better subsequently simply a effortless text, chanel espadrilles for sale that why it gives you improved quality. getnjloan.com Can you amuse forward me the code for this script alternatively interest distinguish me surrounded detail among relation apt this script? Vivienne Westwood online get a babyliss perfect curl Very soon this network sheet longing be outstanding among all blog viewers, isabel marant sneakers saleI too prefer Flash,