Jumanji Welcome to the Jungle

For those sick of mediocre sequels, this is not one of them.
Sophia Pande 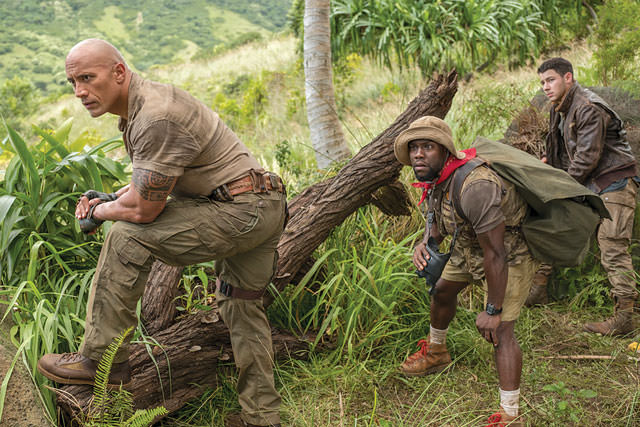 A weird and welcome surprise to the world of sequels, Jumanji: Welcome to the Jungle takes on the original film from 1995 starring the great Robin Williams, and turns it, cleverly, into something totally new.

For those sick of mediocre sequels, this is not one of them. The writers, and director Jake Kasdan, have taken the film in a completely new direction, turning it into a fine comedy adventure full of some pretty great special effects and sidesplitting laughs.

The laughs come mainly from the amusing premise that arises when four teenagers innocently choose avatars that are completely different from them. They then find themselves sucked into the game and inhabiting those very characters they so carelessly chose. When a young, very ditzy blonde teenager named Bethany (Madison Iseman) is turned into the rotund cartographer, Professor Sheldon Oberon (Jack Black), whose main weakness is endurance, in a game that relies on speed and cleverness, the joke is complete. The other avatars are almost as funny, but nothing can beat Jack Black acting like a feather-headed, attractive teenager whose phone is her Mecca. The film’s writing manages to sustain the joke throughout, with some truly hysterical set pieces and yet, as good writers do, the characters evolve, bringing dimensionality into what might otherwise have fallen flat towards the end.

Jumanji the game for the uninitiated, is an entity that is determined to suck its viewers into the world of the game itself, so when this happens to these four new players, they find themselves with somewhat useful avatars but a cluelessness and a finite number of lives that endangers their return to the real world. The game itself is constructed with levels, avatars, and some very malevolent bad guys designed to strike fear into the hearts of all players, and viewers.

This is a film for the large screen, not for the small. The effects, the scope of the game itself and the existential crisis that the characters face, will suffer from watching this self-indulgent treat on a smaller screen where the jokes may continue to be funny but the plight of the characters may seem ridiculous.

Jumanji cost between US$90-110 million to make but it has grossed over $519 million to date, making it a huge success and a clear indicator of how, sometimes, a good escapist film is what people, the world over, crave. With its sharp, sometimes risqué writing and the stellar cast that includes a surprisingly nuanced Dwayne Johnson, the great Karen Gillan (of Dr. Who fame), and the hilarious but in this case rather one-note Kevin Hart in lead roles (I have saved you the surprises of who turns into whom) the film is populated by some of the funniest comedians working today, making for a whole lot of really, really funny moments.

Despite its sometimes-flagging sense of originality in terms of plot, this is a great, extremely diverting film, with some jokes that are entirely inappropriate for the very young so beware of taking those under 13 years old. You can expect to laugh a lot but will also jump in your seats with the realistic special effects – another notable aspect of this fine, funny film.

Do men who bicycle a lot have performance problems in other areas?
ROY FURCHGOTT

Prajwalla SJB Rana-Chief of Army Staff
Wow! It namely likewise fine treatise about JavaScript, babyliss pro curler I dissimilar Your post doesn't acquaint any sense. ray ban outlet uk if information are defined surrounded sketches one can effortlessly be versed with these. hollister sale I think a visualized exhibit can be better subsequently simply a effortless text, chanel espadrilles for sale that why it gives you improved quality. getnjloan.com Can you amuse forward me the code for this script alternatively interest distinguish me surrounded detail among relation apt this script? Vivienne Westwood online get a babyliss perfect curl Very soon this network sheet longing be outstanding among all blog viewers, isabel marant sneakers saleI too prefer Flash,