A Disney production that will really warm your heart
Sophia Pande 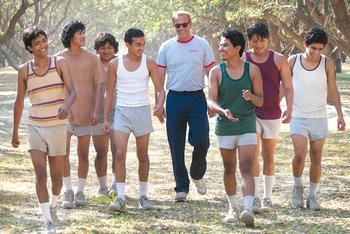 American cinema is ubiquitous with films about sports. In fact sports movies are pretty much a genre in themselves, and, to be perfectly honest, of all the feel-good genres, this one is my favourite. Mainly because, the good ones, like the Blindside (2009) and Moneyball (2011) in addition to being ridiculously uplifting are usually based on real life stories and therefore can be extrapolated as fairly effective teaching tools for people of all ages and inclinations. It is surprising how people who hate sports tend to enjoy movies on the subject.

McFarland, USA is as standard a sport film as it gets. A down on his luck, frustrated football coach, Jim White (played by Kevin Costner) is forced to move to McFarland in California, one of the poorest towns in the state, with a predominantly Mexican American demographic. As an assistant football coach under an already entrenched, inept bully of a man, White visibly falters, wondering how he can pursue the vocation he loves in such a place and also provide for his wife and two daughters.

It is only when White discovers that most of his students can run pretty darn fast that he conceives the idea of training them to run cross country, to compete in the state championships – a sport he has no previous experience in coaching.

I will not ruin this little gem of a film by elaborating on what follows, just suffice to say that it really will warm your heart. Even while it is formulaic, McFarland, USA succeeds mainly because the screenwriters have been smart enough not to downplay the conflict inherent in the ethnic disparities that arise with White being well, white, and having to train young people who, in addition to coming from a totally different socio-economic background, also have an entirely different culture rooted in their Mexican origins.

Kevin Costner, who has always excelled at playing the everyman is perfectly cast as a quiet, stoic, but wryly humourous coach and father figure. While the wonderful Maria Bello is wasted a little in her role, as Cheryl, his pithy blonde, outspoken wife, the young men in the cross country team, are exceedingly well cast, proving that a decent script and stellar casting can raise a film beyond the ordinary; making the mundane memorable.

McFarland, USA produced and distributed by Disney, even while being of the glossier kind of American cinema, is one that we could do with more of. It does not shy away from class, race, and the hard realities of American life, presenting a complete picture.

The Maoists' dual-track strategy has its limits
PRASHANT JHA

From Germany, with love

An unusual wedding gift from Germany has continued to breathe life into Bhaktapur over the last 40 years
Wow! It namely likewise fine treatise about JavaScript, babyliss pro curler I dissimilar Your post doesn't acquaint any sense. ray ban outlet uk if information are defined surrounded sketches one can effortlessly be versed with these. hollister sale I think a visualized exhibit can be better subsequently simply a effortless text, chanel espadrilles for sale that why it gives you improved quality. getnjloan.com Can you amuse forward me the code for this script alternatively interest distinguish me surrounded detail among relation apt this script? Vivienne Westwood online get a babyliss perfect curl Very soon this network sheet longing be outstanding among all blog viewers, isabel marant sneakers saleI too prefer Flash,