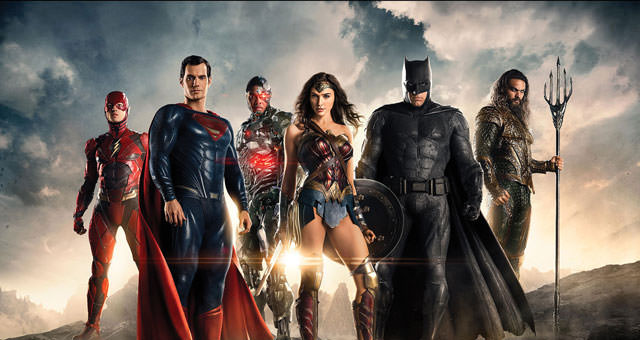 The thing that Justice League has going for it, at a time when all superhero films are at an almost obligatory 150+ minute mark, is that it is short and rather sweet at just two hours in length. While marked by disasters and somewhat infamous for costing US$300 million to make, the film, seen in 2D instead of the needlessly ubiquitous 3D, is almost as funny as Thor: Ragnarok (reviewed previously in this column and currently in theatres along with Justice League), and full of moments that bear re-watching — due to its quite star-spangled ensemble cast.

The DC Comics films, as opposed to the very admired Marvel films, both from wildly successful comic book source material, are not doing well in terms of public opinion. Batman v. Superman (2016) was lamentably bad — though the heavyweights of the title earned the film more than double its also $300-million budget at the box office.

Justice League is a marked improvement on the former installment, where Superman (Henry Cavill) dies, aided and abetted by Batman’s (Ben Affleck) extreme stupidity and banal rivalry. While that terrible film leads to this tolerable one, in between came the incredible, heart-stoppingly good Wonder Woman (summer, 2017) starring the phenom Gal Gadot, who was introduced in Batman v Superman livening it up somewhat — though no one could quite fathom then just how good she’d prove to be.

This film takes off with so much promise, partly because it already has the talent of the great Gadot, the presence of Amy Adams as Lois Lane, and of Diane Lane as Martha Kent, Superman’s two great loves. We are also lucky to be introduced to the nicely cast Ezra Miller, as Barry Allen, aka The Flash, and to Ray Fisher as Victor Stone or Cyborg. Then there is Jason Momoa as Arthur Curry, or Aquaman — so far a character that is compelling due to his sardonic humour, but not so riveting in terms of his super-powers or actual role aside from swimming around, on land and on sea, trying to simmer with disdain for what Bruce Wayne is trying to form: i.e. the Justice League of our title.

The world of Metropolis and Gotham City are in danger from a very silly, horned foe named Steppenwolf (a completely unrecognisable and wasted Ciarán Hinds) who somewhat redeems himself by originating in Themyscira, the island of the Amazon, where Diana Prince, Wonder Woman, hails from.

That scene gives us another great glimpse of fight sequences (too short, far too short) with her mother Hippolyta (played by the under-rated Connie Nielsen) her aunt General Antiope (the wonderful Robin Wright), and the army of magnificent Amazons who do their very best to subdue this villain, who nevertheless retrieves one of the three “mother boxes” he needs to conquer the earth. With that predictable plot summary, all you really need to know is that things end well, with the finale not as grossly boring as usual, mainly because between our four super heroes and one heroine there are enough quips for all, and more than enough gimmicks, to make up for the dull roar of Steppenwolf.

"What has weakened my character?"

Closing down schools is not about improving education, it is power politics at its worst.
CK LAL

Film South Asia 2003 opens next week with a Nepali documentary on the principles of winning, losing and what it is worth.
SRADDHA BASNYAT

As the Maoist war completes eight years, never has peace seemed as remote.
KUNDA DIXIT
Wow! It namely likewise fine treatise about JavaScript, babyliss pro curler I dissimilar Your post doesn't acquaint any sense. ray ban outlet uk if information are defined surrounded sketches one can effortlessly be versed with these. hollister sale I think a visualized exhibit can be better subsequently simply a effortless text, chanel espadrilles for sale that why it gives you improved quality. getnjloan.com Can you amuse forward me the code for this script alternatively interest distinguish me surrounded detail among relation apt this script? Vivienne Westwood online get a babyliss perfect curl Very soon this network sheet longing be outstanding among all blog viewers, isabel marant sneakers saleI too prefer Flash,