The Woman in Gold 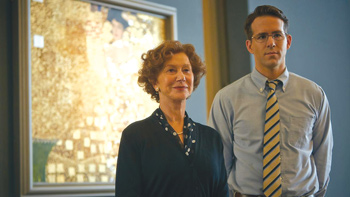 Occasionally Hollywood will churn out an imperfect film that is still utterly captivating. The Woman in Gold is one of those odd little films that could so easily have tended towards formulaic banality had it not been for the focused talents of its two main characters.

Based on the real life story of Maria Altmann, played by the wonderful Helen Mirren, the film deals with the epic case of Altmann’s fight against the Austrian government to retrieve enormously valuable paintings that had belonged to her family, a wealthy, immensely sophisticated Jewish industrialists living in Vienna, who lost everything they owned due to the advent of Nazi influence in Austria.Ostracised and impoverished, Altmann (née Bloch-Bauer, Adele was her aunt by marriage) leaves Austria behind with her husband for the United Stated determined to begin anew.

It is only years later, with the help of Randol/Randy Schoenberg (Ryan Reynolds) a lawyer son of another Austrian-Jewish friend, that she begins a decade long struggle to regain ownership of her family’s lost property.

The case of the ‘Adele Bloch-Bauer’ (or ‘The Woman in Gold’ as it came to be known) painting was a historic one for many reasons. After the war, the Klimt paintings commissioned by the Bloch-Bauer family were displayed at the famous Belvedere House in Vienna, quickly becoming synonymous with Austrian culture. As a result, in addition to complex legalities, the Austrian government was also extremely reluctant to concede the moral and ethical issues linked to the public absorption of paintings seized during the holocaust, aware that returning the Klimt paintings to Altmann could set a precedent for hundreds of such claims in the future.

While the legalities involved are fascinating, the film’s strength is in the wonderful and heartbreaking recreation of the Bloch-Bauer family’s lives in pre-war Vienna, their privilege, their bewilderment at being victimised after having been integral in influential society solely due to them belonging to the jewish faith.

Both Mirren and Reynolds shine in their roles as they battle both the legal system, and sometimes each other, clinging to the case that is so closely linked to the past of both families (Schoenberg’s grandfather was the famous Austrian composer and painter).

For those who followed the case in real time, you will know that Adele Bloch-Bauer’s portrait now resides in New York in the Neue Galerie, bought by the Lauder family for an astonishing $135 million and put on permanent display at the request of Maria Altmann – a shimmering pleasure for all to see, and an incredibly symbolic victory for the Jewish people who lost so much during the war. While this film sometimes descends into self-indulgent sentimentality, the gravity of the situation and the history it seeks to portray makes it essential viewing.

It's getting stale, mate

An open letter to the Big Guys

We young MPs must rise above the party line and remember that we, too, represent the people
SUNIL B PANT

Same same, but different
ARTHA BEED
Wow! It namely likewise fine treatise about JavaScript, babyliss pro curler I dissimilar Your post doesn't acquaint any sense. ray ban outlet uk if information are defined surrounded sketches one can effortlessly be versed with these. hollister sale I think a visualized exhibit can be better subsequently simply a effortless text, chanel espadrilles for sale that why it gives you improved quality. getnjloan.com Can you amuse forward me the code for this script alternatively interest distinguish me surrounded detail among relation apt this script? Vivienne Westwood online get a babyliss perfect curl Very soon this network sheet longing be outstanding among all blog viewers, isabel marant sneakers saleI too prefer Flash,