Instead of opening up a world of possibilities, this film succeeds only in narrowing things down
Sophia Pande 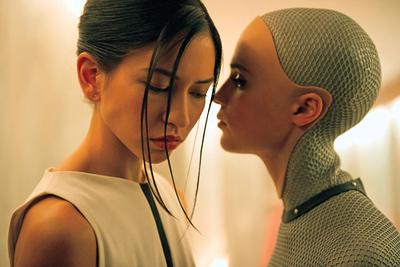 It is always a bit alarming to watch films about artificial intelligence coming to life because invariably these films are filled with paranoia even while most science fiction aficionados ought to know better than to descend into that kind of simplicity, especially someone like Alex Garland whose best seller, The Beach was made into a film with the same name starring Leonardo DiCaprio in 2000. Since then Garland has written screenplays for many sci-fi films including Danny Boyle’s excellent zombie flick 28 Days Later (2002), and Sunshine (2007).

Ex Machina is Garland’s first directorial debut, and while this is a visually beautiful film with what could have been a fascinating premise, Garland messes up by allowing his characters to act in the most obvious possible manner, descending into paranoia at every given opportunity; an inexcusable development given that every single character in this film is a supposed ‘genius’.

The film starts with Domnhall Gleeson as Caleb Smith, a computer programmer who works for the all-powerful Bluebook, the world’s most popular search engine. Gleeson is selected by Nathan Bateman (Oscar Isaac) Bluebook’s enigmatic CEO to pay a visit to his remote hyper secretive home in the wilderness, from where he controls all of Bluebook’s coding and other slightly opaque, possibly nefarious activities.

When Smith arrives by helicopter at Bateman’s vast estate, he is greeted by a fortress like home, and technology that only coding nerds could ever imagine might exist. As Bateman’s reasons for bringing in Smith emerge, the film slowly spirals into a question of intent. Is everybody malicious, or is everyone exactly what they seem? This question is complicated by the fact that Smith has been brought in to conduct the Turing Test (an experiment to determine whether an object is a person or a computer) on Ava (played by newcomer Alicia Vikander) – an artificial intelligence who is as charming as she is perceptive; Ava can tell when you lie.

As one might imagine, things start to go awry as Smith becomes attached to Ava, and Bateman begins to emerge as an even bigger megalomaniac. There are some surprises, of course, in how things ultimately play out, however, as mentioned before, bizarrely facile motivations, and general bad behaviour, from both humans and computers, contribute towards an unconvincing and rather obvious conclusion that leaves a rather bad taste in one’s mouth.

Good science fiction is about opening up a world of possibilities, sadly, this rather superficial land misanthropic film, succeeds only in narrowing things down.

Tagging along to Langtang

So near, and yet so wild
SRADDHA BASNYAT in KENJIN GOMBA

Nepals cuisine is going through a gastronomic rediscovery, and is now much more than just dal bhat tarkari.
SRADDHA BASNYAT
Wow! It namely likewise fine treatise about JavaScript, babyliss pro curler I dissimilar Your post doesn't acquaint any sense. ray ban outlet uk if information are defined surrounded sketches one can effortlessly be versed with these. hollister sale I think a visualized exhibit can be better subsequently simply a effortless text, chanel espadrilles for sale that why it gives you improved quality. getnjloan.com Can you amuse forward me the code for this script alternatively interest distinguish me surrounded detail among relation apt this script? Vivienne Westwood online get a babyliss perfect curl Very soon this network sheet longing be outstanding among all blog viewers, isabel marant sneakers saleI too prefer Flash,