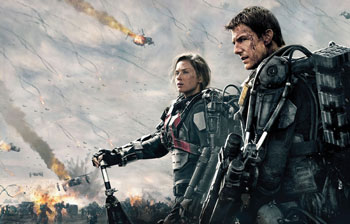 Occasionally a studio gets the usual summer confection just right. While Edge of Tomorrow is clearly not in any way a film that aspires to do more than rake in the millions, unlike the hideously awful and barely watchable Transformers: Age of Extinction (reviewed previously in this column), this one, is a surprisingly good action movie that really does keep you at the edge of your seat.

It goes without saying that Tom Cruise is a very strange man. But regardless of his supposed arranged marriages and his devotion to the possibly quite nefarious Church of Scientology, the man is a mega star. Cruise is likeable even while he’s cocky, a trait that has served him well in the infinite variations of the (usually same) persona he portrays onscreen.

In Edge of Tomorrow he does not stray far as General Bill Cage, a smarmy but quick to learn army officer who has never been in a battle, this in a world where yes, of course, aliens have invaded and humanity is on the brink of extinction. When Cage’s witty quips land him smack dab in the middle of the main offensive on the “mimics” (the rather terrifying and very speedy octopi like aliens who can also control and manipulate time), he finds himself dead - efficiently offed by an “alpha” mimic who spatters black bodily fluid all over him as he dies.

Thus begins the slightly preposterous central refrain of the film, a time loop. Cage finds that the mimics have inadvertently transferred to him (via blood, albeit black) the ability to reset time every time he dies, giving him an opportunity to live longer each time as he teaches himself which pitfalls to avoid on the battlefield?

Sound tedious? Well, I promise you, the film livens up the moment he meets the luminous Emily Blunt. Ridiculously named Rita Vrataski, Blunt is a special forces warrior who has been made a poster child for her fighting skills, and while this charming, delicate British actor may seem like an odd choice for an all out action movie, you will soon begin to see the genius behind the casting.

It is fair to say that in addition to having very high production value, scary aliens, and some pretty stellar action sequences, the main draw is the camaraderie that develops between Cruise and Blunt, two stars who have clear chemistry, leavened by a script touched with humour.

So forget all the alarm bells that may go off in your head trying to figure out the time loop dynamics and enjoy a perfect summer distraction.