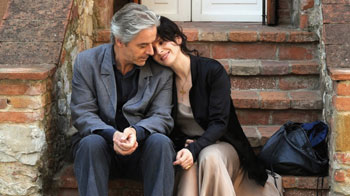 As the autumn season comes round and with it the Oscar scramble, I tend to start my usual rant on the rather sad fact that we, living in Nepal, have almost no access to the heavy weight films that come out this time of year as contenders in the run-up to the awards season.

Hopefully, as time goes by, Nepali theatres will start giving space to the more independent of cinema; the smaller, quite stellar films that seldom get shown here. While I will try to bring these contenders to your attention over the next few months, this week I am writing about Abbas Kiarostami’s Certified Copy which premiered at the Cannes Film Festival in 2010.

This film is made in the spirit of films by Éric Rohmer, Michelangelo Antonioni, and more recently Richard Linklater’s trilogy of the Before films, all of which deal with the nature of a couple’s relationship over the course of the narrative, switching smoothly between real life drama and philosophical musings.

Starring the beautiful and witty Juliette Binoche as the unnamed main character - a French woman living in Italy who deals in antiques, and one day goes on a rather strange journey with an Englishman named James Miller (played by the almost egregiously handsome opera singer William Shimell in a first time role), this is a cipher of a film that is as fascinating as it is infuriating.

Over the course of the day as Binoche’s character and James Miller debate on originality, love, nature of duty and family, the relationship begins to change; the people we initially thought were strangers start to blur into a bickering, playful long married couple who share an unruly child and are struggling to come to terms with their complex 15-year- long marriage.

Binoche is a phenom in this film, playing a woman half neurotic but also tremendously sensitive and sensual, in a multi-lingual role where she switches from English to Italian to French (which is her mother tongue). She is undoubtedly Kiarostami’s muse and in many ways the strength and focus of a film that might have otherwise collapsed without her prodigious talents – after all, it is not easy to make a film where all people really do is walk and talk, albeit through a gorgeous medieval Italian town.

This film, as with many such “talky” movies, may not be quite your cup of tea, but be patient, Certified Copy is the work of a master filmmaker and it is worthy of your attention.