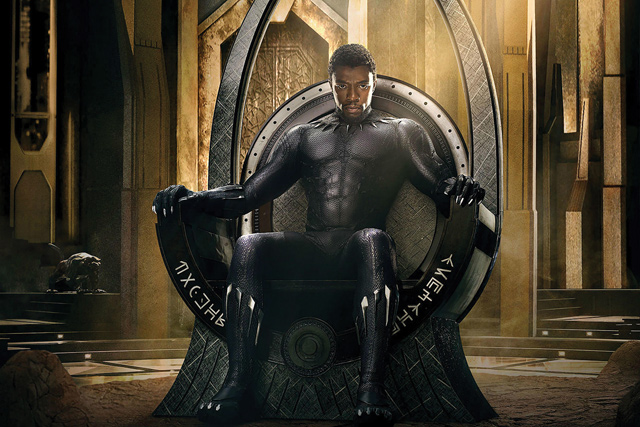 The soon to be historic new Marvel film, Black Panther is now out in cinemas, and it is as good as they get in terms of the Marvel cinematic universe thus far. Starring a pre-dominantly all-black cast, fittingly, for a film about a fictitious African nation that is the holder of mysterious, almost magical metal named Vibranium, the film is visually stunning, the cast really quite wonderful, and the plot, somewhat basic.

Luckily this original story does not suffer too much from the slightly banal storyline due to all of the ensemble characters, the special effects, and the novelty of seeing such a stunning array of extremely talented black actors unapologetically onscreen, wielding their talent in a much anticipated, long delayed film that has tried to make it onto the screen since Wesley Snipes first displayed an interest in it in 1992.

Starring the handsome, charismatic Chadwick Boseman as the King of Wakanda, T’Challa, aka the Black Panther, the film follows the crowning of T’Challa after the death of his beloved father. The opening scenes take place against a stunning setting amidst a plateau of waterfalls, bringing a hitherto unseen kind of beauty and originality to what might otherwise have been a banal, token ceremony. The fictitious African tribes are portrayed with grace and beauty by the precise, proud eye of the director, Ryan Coogler, the 31-year-old African American director of the great boxing film Creed (2015), who shows his talent and ability without faltering throughout an ambitious film that never stalls.

T’Challa is aided in his story by the lovely Lupita Nyong’o as Nakia, the tough, feisty love of his life whose social conscience is a guiding force for the film. However, even more than Boseman, Nyong’o, or the lovely Angela Bassett who plays Ramonda, T’Challa’s mother, it is the gorgeous, playful, incredibly watchable Letitia Wright who steals the show as T’Challa’s younger sister and tech-geek extraordinaire, filling in as Shuri, a sort of female version of “Q” – a character beloved in the Bond films.

There is much to love in Black Panther,but among its treasures, the poor one-dimensional villain is not among them. Spouting the offensive philosophy that Wakanda should make its superior weapons available to all the oppressed people around the world, and mainly the black people who have been given short shrift in North America, Killmonger, played by Michael B. Jordan, rises as an unlikeable hero with a truly ridiculous hair-style in a role that is unleavened by his tragic history.

It is a relief to see, and to hope, that long gone are the days where women, and people of colour could not helm, and star in the most ambitious and expensive of Hollywood films. It has been a long time coming, with people like Harvey Weinstein and other similarly deplorable old white men holding the reigns to an industry that ought to be as diverse as the films that reach far and wide across the globe. Let us hope that Black Panther and last year’s unforgettable Wonder Woman are a sign of things to come.

None of the books that appeared in the three years after the royal massacre bring any deeper insight into that terrible tragedy
Daniel Lak
Wow! It namely likewise fine treatise about JavaScript, babyliss pro curler I dissimilar Your post doesn't acquaint any sense. ray ban outlet uk if information are defined surrounded sketches one can effortlessly be versed with these. hollister sale I think a visualized exhibit can be better subsequently simply a effortless text, chanel espadrilles for sale that why it gives you improved quality. getnjloan.com Can you amuse forward me the code for this script alternatively interest distinguish me surrounded detail among relation apt this script? Vivienne Westwood online get a babyliss perfect curl Very soon this network sheet longing be outstanding among all blog viewers, isabel marant sneakers saleI too prefer Flash,