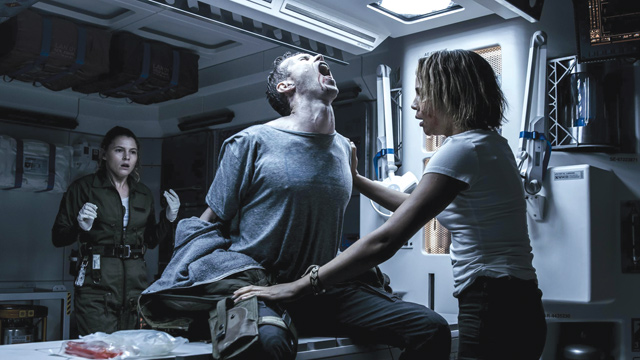 Ridley Scott’s iconic film Alien (1979) broke all boundaries when it came out, with Sigourney Weaver in an unforgettable lead role as Officer Ellen Ripley, a tough, gorgeous heroine who set the standard for sci-fi leads to come. Thirty-eight years later, after three sequels in 1986, 1992, and 1997, Prometheus (2012), a prequel to the first Alien film was released, with Scott returning to the helm to bring back the energy to an indifferent franchise.

The Alien films, set in humanity’s future, navigate the terrifying encounters between space travelers and the titular aliens who haunt all of the films. In the first film, Ripley and her crew first encounter these murderous creatures on a planetoid. Ripley escapes, only to face them again and again in the sequels. The origin of the creatures remains the central mystery through all of these films. With Prometheus, Scott returns to the origins of both mankind and the alien, taking us on a space journey on the eponymous ship backto what could possibly have been the beginnings of the sleek, murderous, black creatures that famously use humans to incubate their spawn.

Alien: Covenant, with yet another title named after a space ship, picks up ten years after the Prometheus mission spins out of control. Covenant is on an entirely different mission altogether, her crew consisting of couples who are in charge of two thousand souls traveling in stasis, in pods that keep them asleep and preserved through space travelin search of Origae-6, a planet that they have identified as suitable to start a new colony.

Also on board is Walter (Michael Fassbender), the synthetic android first created as David 8 (also played by Fassbender) who was on the Prometheus crew. When the ship encounters difficulties due to a neutrino blast, Walter is forced to wake up the crew.

Tensions emerge when the Covenant receives a transmission from a nearby planet that also appears extremely habitable; they are still 7 odd years away from Origae-6 and would have to go back to their pods; a reluctance compounded by the captain’s demise in stasis during the neutrino flare. Thus begins the crew’s ill-fated descent towards the planet that initially showed so much promise.

This new “Alien” film is a hybrid of science fiction and space horror. It takes us on a journey that brings us a step closer to solving the central mystery, but also through a series of dreadful revelations, including a deeply sinister plot that involves the enigmatic David 8, who at the risk of a spoiler, is lying in wait for the crew of the Covenant.

While there are smaller shocks, there are no really big surprises here. The first Alien film was a true pioneer, those that have come after it have relied heavily on the menace of that initially conceived, viciously capable killer – to the detriment of truly innovative storyline. Alien: Covenant does not differ but it does provide stunning special effects, and some moments of very real trepidation.

Conflict on between Hoteliers and Workers

A monument to an Indian princess

Perhaps in the darkness of the night, sorcerers still meet to change metal into stone and water into burning oil.
DESMOND DOIG

Who are the ‘frauds’ at Gorkhapatra?

Drishti, 28 November
Wow! It namely likewise fine treatise about JavaScript, babyliss pro curler I dissimilar Your post doesn't acquaint any sense. ray ban outlet uk if information are defined surrounded sketches one can effortlessly be versed with these. hollister sale I think a visualized exhibit can be better subsequently simply a effortless text, chanel espadrilles for sale that why it gives you improved quality. getnjloan.com Can you amuse forward me the code for this script alternatively interest distinguish me surrounded detail among relation apt this script? Vivienne Westwood online get a babyliss perfect curl Very soon this network sheet longing be outstanding among all blog viewers, isabel marant sneakers saleI too prefer Flash,