A lesson that can be learnt from this film is that of basic humanity asserting itself, or not, during natural disasters
Sophia Pande 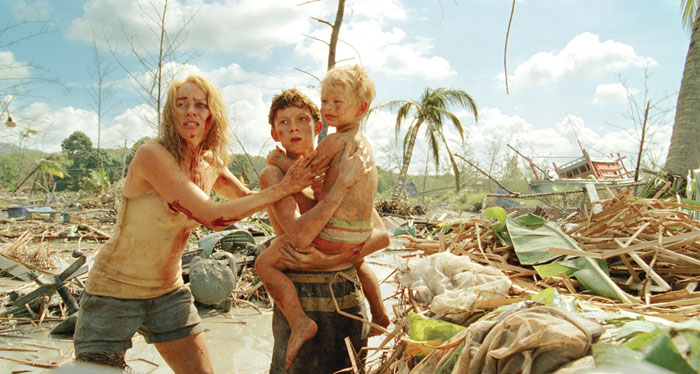 It is hard to write about the arts, much less a ‘fun’ film review in times when one has just felt the ground shake between your feet in such a manner that it would seem the earth might break apart.

All around us, things are broken, people are traumatised and suffering, mentally and physically: sleeping under the rain, and in a lot of cases, wanting of even basic first aid and supplies.

Perhaps the only film that I have seen that comes close to really portraying the horrific, visceral reality of natural disasters is The Impossible (2012) a film about the tragic Indian Ocean tsunami, triggered by a M 9.2 (approximate) earthquake in 2004 that took 280,000 thousand lives and affected Bangladesh, India, Malaysia, Myanmar, Thailand, Singapore, and the Maldives.

For people who choose to see it, be warned, it may be a Hollywood film starring Naomi Watts, as a tough as nails mother, struggling against the elements to save her family, but it is hard to bear. For those of us who have now been through such life altering events, the film drives home one stark point, when earthquakes, or tsunamis, or floods, avalanches, and landslides hit, there is really nothing we can do aside from hold on tight and pray, even if you are a non-believer, that your lucky stars are out that day; natural disasters are strangely democratic in that way. They do not differentiate about where they hit, although, it must be said that it is always the poorest people who receive aid last, and are most affected, simply due to lack of access to facilities that the more affluent can get to much faster.

The other lesson that can be learnt from this film is that of basic humanity asserting itself, or not, during natural disasters. The real life story of Maria Belon (Watts) is one of luck, and a great deal of benevolence on the part of the Thai people, who in the midst of being severely affected themselves, helped people who were in need sometimes above, beyond, and despite, their own immediate woes.

We are in that moment of time where we will be judged (and judge ourselves) by how we act when people are in desperate need. I cannot urge you more to reach out to whoever you can, even if it is just in your neighbourhood, and provide what you are able to. Be it food, water, moral support. It is necessary, it is possible, it is in your hands.

The allegedly upright prime minister of Nepal has surrounded himself with unreformed bandits and murderers
KANAK MANI DIXIT
Wow! It namely likewise fine treatise about JavaScript, babyliss pro curler I dissimilar Your post doesn't acquaint any sense. ray ban outlet uk if information are defined surrounded sketches one can effortlessly be versed with these. hollister sale I think a visualized exhibit can be better subsequently simply a effortless text, chanel espadrilles for sale that why it gives you improved quality. getnjloan.com Can you amuse forward me the code for this script alternatively interest distinguish me surrounded detail among relation apt this script? Vivienne Westwood online get a babyliss perfect curl Very soon this network sheet longing be outstanding among all blog viewers, isabel marant sneakers saleI too prefer Flash,