The story is irresistibly touching, even for the most hardened, cynical viewer
Sophia Pande 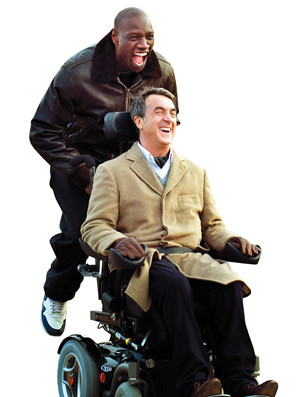 The Intouchables, a French film from 2011, is based on the true story of a rich quadriplegic Parisian named Philippe who hires an unorthodox caregiver against all conventional wisdom. Their story, portrayed in this albeit very Hollywood version, is irresistibly touching, even for the most hardened, cynical viewer.

When Philippe (François Cluzet) first encounters Driss (Omar Sy), he has been waiting for hours in a long line of potential caregivers. Driss, a tall, young Senegalese man fresh out of prison for robbery is visibly impatient when he strides into the interview room, demanding a signature guaranteeing that he has applied for the job even if he is rejected so that he may eventually go on his welfare benefits. Although initially a bit taken aback by Philippe’s state, Driss and he have several dry and witty exchanges, Driss’s attitude being fairly unsympathetic to Philippe’s state, as Philippe becomes increasingly animated, partly spurred on by a hitherto never felt before antagonism.

When Driss finds himself hired for a trial period of four weeks, he reluctantly moves into Philippe’s astonishingly luxurious mansion. It is a testament to Omar Sy’s undeniable comedic acting skills that every scene he inhabits is infused with humour, sometimes a little slapstick but always charming, enhanced by his physicality - Sy having the uncanny ability to move himself both clumsily and gracefully, as he wants, when the moment is appropriate.

Cluzet too is a wonder in the film, especially considering that he can only really express himself above his neck. With his kind eyes, his reluctant laugh and his air of refinement despite his terrible circumstances, Cluzet embodies the tragedy of a life that has been cut short, limited on every level except cerebrally.

As the two companions drift through the film’s episodic structure, their bond becomes stronger, partly through a shared sense of the absurd and partly through a certain understanding that develops between them despite the vast differences in their upbringing.

This film’s charms, of which there are many, lie in the extraordinary rapport between the two lead actors. Both are obviously individually very talented, but the alchemical result of their interactions is what makes viewing such a pleasure.

Even in situations that are partly goofy and partly just plain hard to believe, the two actors carry the scenes with a lightness and compassion that is hard to find in such a heavy subject.

Rust and Bone, another French film (reviewed previously in this column), dealt with a similar subject, but in an entirely different manner. While that film dealt its blows with a sledgehammer, unabashedly milking the viewer’s emotions through melodrama, The Intouchables chooses the opposite method, lightening even the most heavy of subjects with humour and laughter.

Obviously neither film is true to the real horror and anguish of people who find themselves suddenly without the use of their limbs, not even The Intouchables which clearly departs quite frequently from the reputed ‘trueness’ of the story upon which it is based.

There is very little that one can say about this other than the fact that perhaps the only way such painful subjects can be brought to mainstream viewers is through a veneer, either of high melodrama or, in this case, compassionate comedy.

It is clear that the viewer today needs subjects of ease to slip into in order to access the escapist zeitgeist that has taken over the world of commercially successful cinema. Under these difficult circumstances, one may as well laud this incredibly well intentioned, highly enjoyable product by the writing-directing duo Olivier Nakache and Éric Toledano. With sleight of hand and a lightness of touch, these two have made one of the most touching and memorable films I’ve seen in a long time.

Peaceful evening after the strike

Passover in the Hindu kingdom

8 April | 1 PM NST
Wow! It namely likewise fine treatise about JavaScript, babyliss pro curler I dissimilar Your post doesn't acquaint any sense. ray ban outlet uk if information are defined surrounded sketches one can effortlessly be versed with these. hollister sale I think a visualized exhibit can be better subsequently simply a effortless text, chanel espadrilles for sale that why it gives you improved quality. getnjloan.com Can you amuse forward me the code for this script alternatively interest distinguish me surrounded detail among relation apt this script? Vivienne Westwood online get a babyliss perfect curl Very soon this network sheet longing be outstanding among all blog viewers, isabel marant sneakers saleI too prefer Flash,