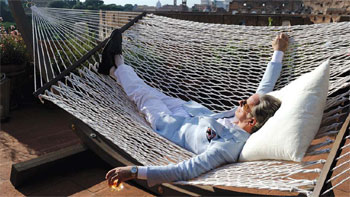 There are some giants of Italian cinema: Fellini, Antonioni, the Taviani brothers, and now, without a doubt, with The Great Beauty (La Grande Bellezza) Paolo Sorrentino. Even if Sorrentino never makes another movie, his legacy will remain with this astonishingly beautiful film that while undeniably paying homage to Fellini’s La Dolce Vita (1960) and Antonioni’s marvelous La Notte (1961) to name just a few, also manages to retain its very specific and magical originality.

Multi-layered in numerous ways, the viewer is often left breathless at the spectacle, the virtuoso cinematography, and the heady dialogue as we follow the decadent life style of one Jep Gambardella (Toni Servillo), a once successful novelist turned socialite who has somewhat lost his way in the sixth decade of his life. Jep has an amazing (and undoubtedly fictitious) apartment in Rome that looks out onto the Colosseum. He gives the best parties in town that include Italian aristocracy, artists, pseudo artists, and the generally blasé Roman intelligentsia, all of whom stay behind to moan the loss of this or that albeit in a particularly witty Italian fashion.

But how can I describe the breadth of this film in mere words? Sorrentino is a filmmaker who understands that cinema can have endless visual possibilities and he reaps the talents of his obviously brilliant cinematographer, Luca Bigazzi, giving us a portrait of that eternal city, Roma; one that is unforgettable in its sheer luminosity.

This is essentially a film about existential angst: at one point, after being asked repeatedly why he never wrote another novel, Jep finally responds truthfully saying that he kept waiting for La Grande Bellezza, but never found it.

In a complex film like this, which asks questions about life and death and art and everything else of worth, we never really find the answers, just endlessly beautiful set pieces that are so sophisticated and complicated that they represent life itself in all its messy glory.

Perhaps I sound too lofty, but since you haven’t seen it and I have, let me continue to wax poetic on a film that should and ought to have won both the Palme d’Or this past year at Cannes, as well as the Foreign Language Film category at the Academy Awards next week.

The Great Beauty is a film that I will certainly be returning to time and again, along with the other above mentioned eternal greats. The only difference being that this film has a mischievous and highly engaging element of humour both visually and in the dialogue that are original to it, elevating it to a truly sophisticated hybrid that poses philosophical questions constantly without ever taking itself too seriously.

If you have time for just the one film this week, pick up this one. Do not be afraid of its blatant art house origins, for as with the best of films, once you are absorbed in it, you will not be able to take your eyes away. It is just a bit of a shame that if you don’t understand Italian you won’t know whether to read the subtitles or watch the glorious spectacle.

All of Nepal is invited!
SRADDHA BASNYAT

Theres more to the story than just a revision in prices.
ASHUTOSH TIWARI

"We are the people."

Bamdev Gautam, CPN UML standing committee member, in Kantipur, 12 October
Wow! It namely likewise fine treatise about JavaScript, babyliss pro curler I dissimilar Your post doesn't acquaint any sense. ray ban outlet uk if information are defined surrounded sketches one can effortlessly be versed with these. hollister sale I think a visualized exhibit can be better subsequently simply a effortless text, chanel espadrilles for sale that why it gives you improved quality. getnjloan.com Can you amuse forward me the code for this script alternatively interest distinguish me surrounded detail among relation apt this script? Vivienne Westwood online get a babyliss perfect curl Very soon this network sheet longing be outstanding among all blog viewers, isabel marant sneakers saleI too prefer Flash,