It is a powerful, unflinching, and perhaps unnecessarily harsh character study of man who was instrumental in the evolution of the personal computer.
Sophia Pande 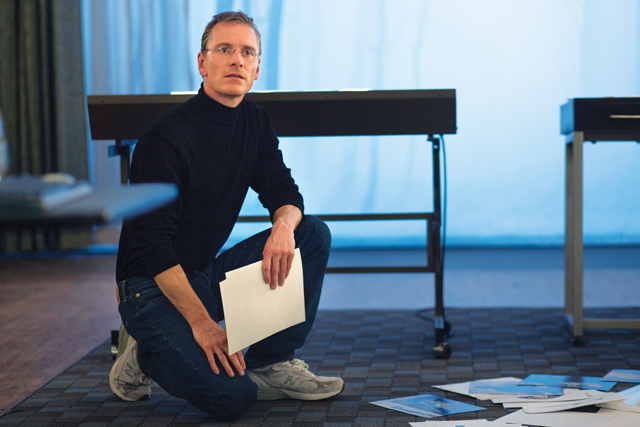 In the opening scene of Steve Jobs - Danny Boyle’s unexpected, restrained, yet dynamic latest film, Arthur C. Clarke tells us in a black and white film reel that by 2001, computers will have evolved so much that we will be able to book our theatre tickets, speak to our families, and access our bank statement from our screens. Listening to him tell this to a bemused technician sounds so much like science fiction that we almost disbelieve the breadth and scope of his prediction – the computer has evolved in such leaps and bounds over the last three decades that even though everything that Clarke has said has indeed come to pass, we cannot quite believe it.

The personal computer, or PC, was already very much in the picture when this film about the visionary who created the Mac, Steve Jobs (Michael Fassbender), begins. Structured in a tightly written three act screenplay by none other than Aaron Sorkin, a brilliant screenwriter who is now Hollywood’s go-to-person for biopics about famous personalities in the technological field (Sorkin also wrote The Social Network in 2010 about Mark Zuckerberg and the beginnings of Facebook), Steve Jobs begins in 1984, with Apple’s first launch of the highly anticipated Macintosh computer.

Riding on the swell of a hard won spot during the Superbowl, in a commercial that was the then equivalent of a million likes on Facebook, Jobs is struggling with Andy Hertzfeld, an engineer who has just informed him that the new, cutting edge operating system will not be able to say ‘Hello’ to the crowd because it has unexpectedly crashed after a number of test runs.

The film follows Jobs in scene after scene as he moves through the minutes before the launch, dealing with his closest colleagues, allies, his little daughter Lisa, whose paternity he refuses to acknowledge, guided ceaselessly by his marketing executive at Apple, and self-admitted work-wife, Joanna Hoffman (Kate Winslet) in an incessantly revealing film that exposes the very worst, and occasional best, behaviour of a brilliant but difficult man.

While you may not be a part of the cult of Steve Jobs, and you may not even use a Mac, this film is more than just a biopic; it is a powerful, unflinching, and perhaps unnecessarily harsh character study of man who was instrumental in the evolution of the personal computer, remaining relevant, hated, and admired for over thirty years, until his tragic and untimely death in 2011 at the age of 56. Boyle, the incredible ensemble cast, and a tight, vibrant narrative that reveals without gimmicks make for a riveting, clever, and penetrating film about a visionary who left this world too soon at the height of his abilities.

A saffron lady in white

When the going got tough, Vijayaraje Scindia of Gwalior got going.
CK LAL

"I still believe talks are possible"

Prachanda wrote to Sher Bahadur Deuba assuring an end to the violence as soon as they reached the negotiating table.

Regardless of its outcome the only way forward for the Maoists is armed struggle.
HARI ROKKA
Wow! It namely likewise fine treatise about JavaScript, babyliss pro curler I dissimilar Your post doesn't acquaint any sense. ray ban outlet uk if information are defined surrounded sketches one can effortlessly be versed with these. hollister sale I think a visualized exhibit can be better subsequently simply a effortless text, chanel espadrilles for sale that why it gives you improved quality. getnjloan.com Can you amuse forward me the code for this script alternatively interest distinguish me surrounded detail among relation apt this script? Vivienne Westwood online get a babyliss perfect curl Very soon this network sheet longing be outstanding among all blog viewers, isabel marant sneakers saleI too prefer Flash,