The sensitive, nuanced portrayal of the characters as well as the droll, sometimes even farcical, trials and tribulations of the people around them keep the viewer rapt
Sophia Pande 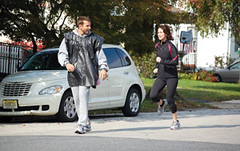 This latest film by David O Russell caught me by surprise. His last, wonderful film The Fighter (2010) is in many ways seemingly the antithesis of Silver Linings Playbook, but on second glance it becomes apparent that, in fact, these two films share quite a few elements: the intricacies of the relationships between parents and children, the unconditional love between siblings, the maddening eccentricities of one’s parents (and children), and the indisputable fact that indeed, no one’s family is perfect. While The Fighter is very firmly in the dramatic category, Silver Linings Playbook has been labelled a romantic comedy. Don’t be fooled and put off by this categorisation though. While I am not willing to entirely slam this particular genre, I will admit that it has given birth to more mediocrity than excellence. Luckily, Silver Linings Playbook falls into the latter.

Outwardly the film follows the very mundane plot line of two people meeting, getting to know each other, overcoming several obstacles in their path to happiness, and living happily ever after. However, even from the very outset our two very star-crossed lovers are so much more interesting than the average Ryan Reynolds, Rachel McAdams types. Bradley Cooper plays Pat Solitano Jr a school teacher turned mental asylum inmate who had previously thought his anger issues were run of the mill until he discovered his wife in the shower with her fellow history teacher. His reaction, involving extreme violence, lands him with a restraining order barring him from approaching his wife and said history teacher, as well as a mandatory period at the mental asylum. When Pat’s mother Dolores (played by the hilarious Jacki Weaver) rescues him from the asylum, Pat Jr returns home reluctantly to be anxiously monitored by his parents. Robert DeNiro does an equally comedic turn as Pat Sr, a man who himself has anger issues and has been barred from ever entering a football arena after having inflicted grievous bodily harm upon several people at an Eagle’s game in his youth.

Enter Tiffany Maxwell (played by the extremely talented Jennifer Lawrence) a recovering depressive and sex addict who went into a decline after the death of her long suffering but stoically loving husband.

Even as Pat Jr resists, Tiffany’s sharp tongue and prodigious intelligence captivate him, though Pat doggedly refuses to acknowledge that the growing friendship between them might become something more, were he only to accept that his wife will never take him back.

Of course the story goes through several ups and downs, as romantic comedies are wont to do. However, it is the sensitive, nuanced portrayal of both of these deeply flawed human beings as well as the droll, sometimes even farcical, trials and tribulations of the people around them that keep the viewer rapt.

Cooper, Lawrence, Weaver, and DeNiro have all been nominated for each of the Best Actor/Actress and Supporting Actor/Actress categories in February’s Academy Awards ceremony; no mean a feat for the seemingly ‘light’ film that Silver Linings Playbook initially purports to be. These nominations are more than well-deserved, backed though, of course, by the behemoth publicity machine behind the Weinstein production company. Watch the film and decide for yourselves if any of the four deserve to win.

DANIEL B HABER
Wow! It namely likewise fine treatise about JavaScript, babyliss pro curler I dissimilar Your post doesn't acquaint any sense. ray ban outlet uk if information are defined surrounded sketches one can effortlessly be versed with these. hollister sale I think a visualized exhibit can be better subsequently simply a effortless text, chanel espadrilles for sale that why it gives you improved quality. getnjloan.com Can you amuse forward me the code for this script alternatively interest distinguish me surrounded detail among relation apt this script? Vivienne Westwood online get a babyliss perfect curl Very soon this network sheet longing be outstanding among all blog viewers, isabel marant sneakers saleI too prefer Flash,