This film is strikingly compelling, causing the viewer to both cringe as well as be unable to take her eyes off the screen
Sophia Pande

The title Rust and Bone is enigmatic. Going into the film, one doesn’t quite know how these two disparate nouns will factor into this story of two very star-crossed lovers who struggle with themselves and their bodies, kicking and screaming their way to a happy ending.

Jacques Audiard’s latest film is tough to watch. It’s tough on the audience, tough on its actors; its cinematic style unglamorous and unforgiving. Regardless of these aspects of Audiard’s (I have not seen his previous films but have read of his quirks), the film is strikingly compelling, causing the viewer to both cringe as well as be unable to take her eyes off the screen, a combination that can only really be achieved by a master.

So much of reviewing cinema has to do with taste and I will admit freely that Audiard’s style disturbs me as much as Clint Eastwood’s in films like Mystic River(2003) and Million Dollar Baby (2004). Both directors tend towards extreme drama, milking the viewers’ emotions, mostly using the guise of working class issues, gender, and other such political subjects to excuse their heavy handed manipulation of the audience, torturing us (almost gleefully) with the awful things that inevitably happen to their main characters (most of whom are not very likeable). 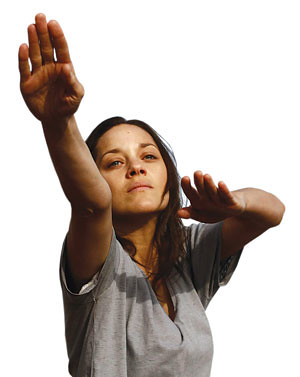 Undeniably both directors are highly talented even while their methods are rather underhand. Luckily, this particular Audiard film, though sharing the above-mentioned distasteful elements, manages to transcend its genre mainly through the astonishingly riveting and humane performances of its two main actors, Marion Cotillard and Matthias Schoenaerts.

Cotillard plays Stéphanie, a whale trainer who suffers a horrific accident when an orca accidentally demolishes a stage on which she is standing. Waking up to find both her legs amputated above the knee, Stéphanie, a beautiful but slightly repressed woman, goes into an inevitable decline. Enter, Alain, played by Schoenaerts, a brutish young man with an infant son, who drifts into Antibes to stay with his sister after a nebulously described split from his wife.

Alain is self-centred, mostly callous with his son, careless with his sex life and not particularly careful with his words. Having met Stéphanie before her accident, when he rescues her from a bar fight, he is strangely not disconcerted when she calls him post accident from her specially equipped apartment and from a wheelchair.

What follows is riveting due to the naturalness of the two central characters. Even while dealing with the heaviest of issues, Cotillard and Schoenaerts portray their characters without artifice, always drawing back from overly sentimentalising their tragic, almost sordid situations.

It’s hard to know why one would want to make such a film. Rust and Bone leaves us with so many questions, some of which might be deemed unnecessary. Does one really want to watch a beautiful woman in her prime, lose her legs and drag herself off her hospital bed in anguish? Do we want to witness the scars that are inflicted upon a neglected child by an oblivious parent? Do we want to care about these very flawed, very complicated human beings whose uniquely painful situations could only have been realised in an Audiard film?

I cannot answer any of these questions, but I will say that, if nothing else, Rust and Bone is worth seeing for its performances and one transcendental scene involving Cotillard as she visits the orcas after her accident, on crutches and walking, ever so slowly on her prosthetic legs. Perhaps after watching this wrenching scene, one can finally get an inkling of what the title may mean.

Whose loan is it anyway?

An ancient Nepali board game enjoys a revival in Switzerland.
SHRADDHA BASNYAT

When things get so messed up, they can only get better.
RAJENDRA DAHAL

"I am at the kings disposal"