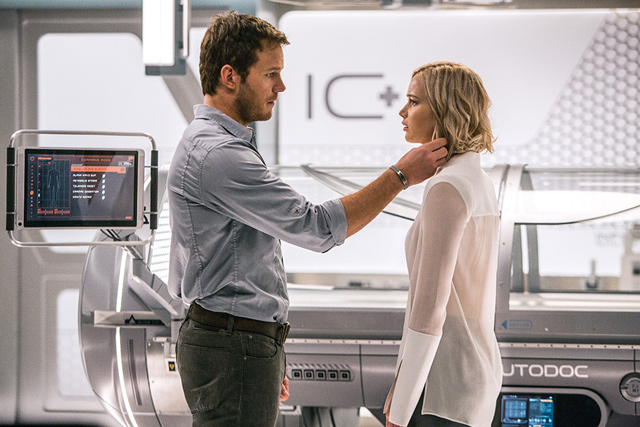 It is fairly apparent that there are very few people left in Hollywood who are really willing to take a risk. Even with the stunning, gob smacking really, beauty of Passengers’s special effects, the crux of the story is so unstable and so unfortunately mundane for a film that takes place on a starship that the viewer is left feeling slightly bewildered, as if a romantic dramedy somehow genre warped into a really banal Star Trek sequel.

Starring two very versatile actors, Chris Pratt and Jennifer Lawrence, the film follows the deeply disturbing premise regarding the loneliness of space travel. Pratt plays Jim Preston, a mechanical engineer (a very conveniently plotted aspect that manifests in almost ever action point in the script) who is traveling on the Avalon - a starship that is carrying 5,000 passengers on an intergalactic immigration trip to Homestead II, a planet that offers new opportunities outside of an over crowded Earth, but requires a 120 year trip that must undertaken in a hibernation pod.

When Jim is very rudely awakened from his cryogenic sleep he finds himself the sole person conscious. Supposed to wake up four months before arrival along with all the other immigrants, in the slow, bleary moments after cryo-sleep, Jim begins to realise that something is terribly wrong. After some awkward grappling with the ubiquitous Artificial Intelligence, or A.I., that runs the enormous state-of-the-art ship, Jim realises, to his horror, that he has awakened 90 years before Avalon will reach Homestead II.

As with Andrei Tarkovsky’s gloriously sublime Solaris - this could have been an opportunity for the screenwriter Jon Spaihts to explore the existential crisis of what it means to be in space; truly alone, surrounded by 5000 sleeping souls.   Unfortunately, plot twists, however apparently ill advised, are necessary in mainstream cinema. And so another passenger, you guessed it, a blonde, charismatic beauty, Aurora Lane, played by Jennifer Lawrence, wakes up one year after Jim’s tortured stint on a spaceship that boasts French fine dining and an Art Deco bar completed with an android bartender Arthur (played by Martin Sheen) just in time to save him from going mad.

How and why Jim and Aurora are woken up, their fate, along with a very unorthodox love story laced by a smattering of action movie sequencing towards the end makes for a strange film, and while swimming in a transparent swimming pool that juts out of the side of a starship which is hurtling through space could make your breath stop for a few moments, the film itself is a gorgeous, empty projection, not unlike the huge space windows that adorn the gold class passenger suites, onto which you can wish any kind of view, just as long as it is beautiful.

You got to have faith

Tech-savvy South Koreans are shamanic believers who complement their belief in Buddhism, Confucionism and Christianity

While China and India have officially recognised the practice, Nepal government is reluctant
Wow! It namely likewise fine treatise about JavaScript, babyliss pro curler I dissimilar Your post doesn't acquaint any sense. ray ban outlet uk if information are defined surrounded sketches one can effortlessly be versed with these. hollister sale I think a visualized exhibit can be better subsequently simply a effortless text, chanel espadrilles for sale that why it gives you improved quality. getnjloan.com Can you amuse forward me the code for this script alternatively interest distinguish me surrounded detail among relation apt this script? Vivienne Westwood online get a babyliss perfect curl Very soon this network sheet longing be outstanding among all blog viewers, isabel marant sneakers saleI too prefer Flash,