A young female journalist embarks on an investigation to try and locate the whereabouts of Nimalarajah, a Tamil journalist who disappeared over seven years ago
Sophia Pande 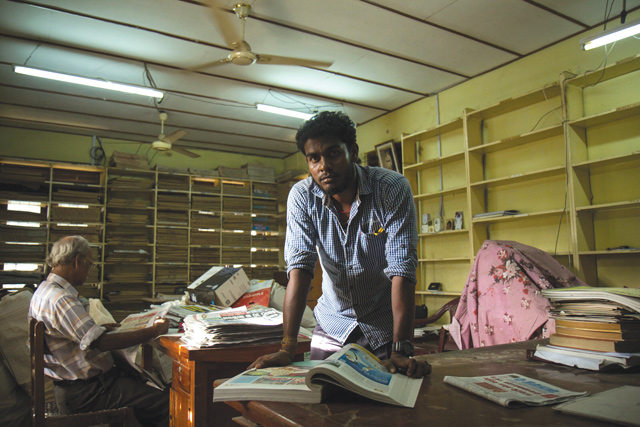 It’s that time of year again when the documentary form is highlighted by the Kathmandu International Film Festival (KIMFF) and the biennial Film South Asia 2015 (FSA 2015), both of which give us in Kathmandu an opportunity to engage with a wide, incredibly varied range of subjects.

KIMFF was slightly marred last year by political meddling when the Rajapaksa government applied pressure on Nepal to pull the screening of No Fire Zone (reviewed here) - a visceral, journalistically rigorous documentary that indicted the Sri Lankan government and its complicit army in an allegedly calculated genocide - killing thousands of innocent Tamils in 2009 in the push to win the war against the Tamil Tigers.

It is fitting therefore that FSA this year is showing News from Jaffna - a 28-minute long documentary that follows the path of a young female journalist, Thadsa, who works for Uthayan - a widely known daily paper run by Tamils out of Jaffna. The paper refuses to blink in the face of widespread media censorship - which exists, as Thadsa points out in one of her investigative pieces, whether you are Sinhalese or Tamil.

As Thadsa embarks on an investigation to try and locate the whereabouts of Nimalarajah, a Tamil journalist who disappeared over seven years ago - we see the fear that pervades throughout – from the people she interviews, to her own editor Premananth who has seen the paper through arson (its press was set on fire) and murder (two journalists were killed by the paramilitary).

Made very simply but with eloquence by Kannan Arunasalam, a human rights lawyer himself, this documentary is particularly poignant at this specific point in time in our own history as we struggle to become as inclusive as possible. Both countries have been through debilitating conflicts and while Sri Lanka ploughed through its Tamil dissenters (yes, they were armed secessionists who employed unforgiveable terror tactics, however, the element of tacit anti-Tamil sentiment must be underscored here) we must take a breath to realise that we cannot and must not do the same with our issues involving people who have been historically marginalised; rhetorical and literal xenophobia must stop.

Sri Lanka’s freedom of press and freedom of speech is still staggering to recover, even after the unexpected ousting this year of the formidably corrupt (morally and otherwise) Mahinda Rajapaksa who actively disappeared dissenters during his regime.

Nepal’s democracy, though flawed, still has a chance to use dialogue and must invoke its latent duty to protect and care for every single citizen as we move through these difficult times. Our struggle may not yet have been documented in film, but we should not have to wait for such an indictment - the world is watching us.

No Fire Zone and Expecting

Editorial in Kantipur, 29 November
Wow! It namely likewise fine treatise about JavaScript, babyliss pro curler I dissimilar Your post doesn't acquaint any sense. ray ban outlet uk if information are defined surrounded sketches one can effortlessly be versed with these. hollister sale I think a visualized exhibit can be better subsequently simply a effortless text, chanel espadrilles for sale that why it gives you improved quality. getnjloan.com Can you amuse forward me the code for this script alternatively interest distinguish me surrounded detail among relation apt this script? Vivienne Westwood online get a babyliss perfect curl Very soon this network sheet longing be outstanding among all blog viewers, isabel marant sneakers saleI too prefer Flash,