Lessons learn't inside and outside the classroom
Sophia Pande 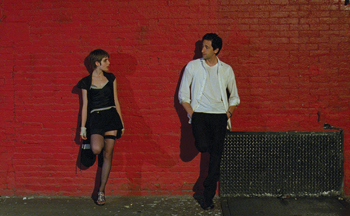 Monday, 22 July was Guru Purnima, the day you thank your teachers for all the knowledge they have given you. And while I have been lucky enough to have had my fair share of unforgettable and awe-inspiring teachers, I have also had my fair share of terrible ones. So in the spirit of thanking all the deserving ones and bringing the undeserving to task, I would like to review Detachment (2012), a film about teachers, their fragile students, and the lessons you can teach and learn - inside the classroom as well as outside of it.

Detachment is the fourth film by Tony Kaye whose first film was the searingly violent American History X (1998). Kaye started off by making music videos for people like Roger Waters and Johnny Cash and his roots show in the style of this particular film which often breaks its narratives to show us poetic flashbacks of the main character’s past, interviews with him, as well as sudden slightly random segues into animation.

Personally, I do not find these devices particularly useful or poetic, especially since the main story itself is so compelling. This is partly because the protagonist, played by Adrien Brody, a sensitive and highly talented actor whose portrayal of Henry Barthes – an emotionally detached substitute teacher – is particularly nuanced and therefore particularly heartbreaking.

Barthes is a wanderer, taking advantage of his transient teaching positions so that he never settles, never engages, and never forms attachments aside from his commitment to his ailing, aged grandfather whom he supports in a nursing home.

But this time, in an unnamed high school, something changes. Barthes is an enigmatic, romantic figure to his teenage students, an adult who seems withdrawn, but occasionally exhibits signs of caring passionately. The high school students are the epitome of disenfranchised, disenchanted teenagers, their teachers struggling to reach these young people through their teenage angst (for everyone who can remember that horrific time as a teenager, you will understand and cringe).

As Barthes starts to care for his students and particularly for one disturbed, but very talented girl called Meredith (played by Betty Kaye, Tony Kaye’s daughter), he also develops a relationship with a fellow teacher, Sarah Madison (played by the lovely Christina Hendricks) and reluctantly becomes temporary flatmates with Erica (Sami Gayle), a young, maladjusted, neurotic, but vulnerable teenager who has fallen into prostitution to support herself.

Slowly, as all of these relationships begin to influence him, Barthes evolves, his teaching becomes ever more relevant to his teenagers, and his humanity starts to manifest. However, Detachment is by no means a feel-good movie. There are tragedies, deaths, and ugly sordid secrets. Perhaps too many to create a truly cohesive story, and yet, what a story it is.

Detachment is a testament to the power of teachers who care; teachers who are good human beings and have direct access to young adults at the most difficult time in their lives and can make a difference, through their teaching and through their actions.

Education can change people’s lives, always for the better, and just one exceptional teacher can touch and save the lives of myriad haunted young souls. So, all you great teachers out there, you know who you are, and thank you. As for the bad ones (and yes, I do want to sound didactic), well, you know who you are too, so, watch Detachment think about the immense power you wield, the impact you can have, and, for pity’s sake, if you don’t care about your students and you can’t teach, perhaps it’s time to quit.

Losing lives to save them

Interview with UML Chairman Jhalanath Khanal in Himal Khabarpatrika, 17 Nov-1 Dec
Wow! It namely likewise fine treatise about JavaScript, babyliss pro curler I dissimilar Your post doesn't acquaint any sense. ray ban outlet uk if information are defined surrounded sketches one can effortlessly be versed with these. hollister sale I think a visualized exhibit can be better subsequently simply a effortless text, chanel espadrilles for sale that why it gives you improved quality. getnjloan.com Can you amuse forward me the code for this script alternatively interest distinguish me surrounded detail among relation apt this script? Vivienne Westwood online get a babyliss perfect curl Very soon this network sheet longing be outstanding among all blog viewers, isabel marant sneakers saleI too prefer Flash,