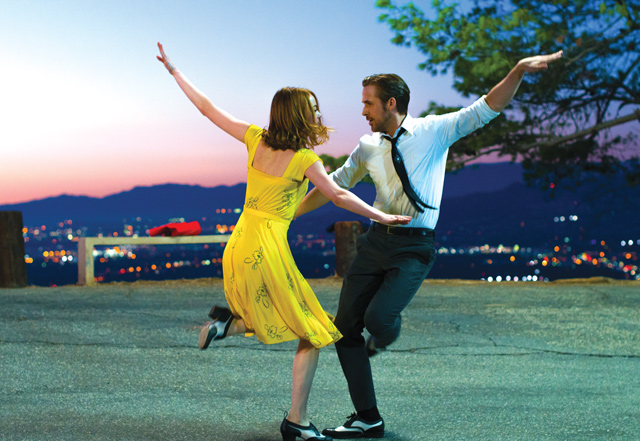 La La Land is the forerunning Oscar contender for Best Picture this year with an astonishing 14 nominations that recognise the talents of its young director, Damien Chazelle, and the leads, Emma Stone, and Ryan Gosling, along with two original songs that define this fun, airy musical with a surprisingly steely core.

As someone who is not a fan of musicals, the singing and dancing aspect of La La Land kept to a minimum, is, quite frankly, a relief partly because the music part of the film is the least charming aspect of it, the tunes being the frothy, run of the mill stuff that will probably not stand the test of time.

The real genius of the film lies in the casting, the well written roles, the thoughtful, sensitive cinematography that is directed with humour and pathos, as well as the resistance to pat, happy endings that are ultimately more deeply satisfying than the usual sugary stuff that is often stuffed down our throats, leading to insanely high, unrealistic expectations regarding how one’s partner ought to be perfect, a romantic comedy con that began around the same time as the late 1930s De Beers campaign that solidified the diamond as the symbol of ‘forever’, before that, any kind of engagement ring was perfectly acceptable.

Ryan Gosling and Emma Stone star as the truly likeable couple, Sebastian and Mia, a jazz musician and aspiring actress who paths keep crossing in the City of Angels. While things do not start out well between these two, their interactions, all of which are delightfully funny, bodes well for their future together. As the two get together over fantastical musical routines, some quite bearable, in particular the light, unaffected dancing, we see a series of classic Hollywood set-pieces play out in beautifully lit scenes and well chosen locations, bringing real gravitas to what might have been a fluffy film about an actor and a musician.

There are stereotypes here to start with, but the film succeeds in moving past them, bringing something very real to Mia and Seb’s relationship and their future together as they begin to see each other for how special they are, realising slowly, with true heartbreak, how their other passions might lead them away from each other’s sides.

I did not expect to like this film, but I really did, mostly because of Stone and Gosling’s abilities to bring so much humanity to what might be considered superficial first world problems and neuroses. The film, I believe, has gotten flak for being too “white”, but personally, I don’t see why every film must strive to be diverse and political if it is not in its inherent nature. La La Land is what it is, a very appealing, really lovely, slightly goofy love story about two people who fall in love in modern day Los Angeles.

Will the Maoists split?, Kantipur

When there is so much to do to catch up, progress can be slow
ANURAG ACHARYA

"Let's not be the laughing stock"

Interview with former CEO of ActionAid International, Ramesh Singh Malla about the development lessons, achievements and challenges of Nepal
Wow! It namely likewise fine treatise about JavaScript, babyliss pro curler I dissimilar Your post doesn't acquaint any sense. ray ban outlet uk if information are defined surrounded sketches one can effortlessly be versed with these. hollister sale I think a visualized exhibit can be better subsequently simply a effortless text, chanel espadrilles for sale that why it gives you improved quality. getnjloan.com Can you amuse forward me the code for this script alternatively interest distinguish me surrounded detail among relation apt this script? Vivienne Westwood online get a babyliss perfect curl Very soon this network sheet longing be outstanding among all blog viewers, isabel marant sneakers saleI too prefer Flash,