If you need to get away from it all, this film might just be your thing
Sophia Pande 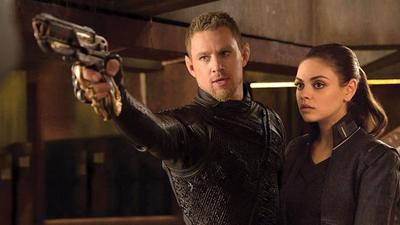 It seems frivolous to write a film review when so many people are still in need of aid: most of us still feel the sickening lurch beneath our feet when the earth moves in the numerous aftershocks that continue to succeed that major earthquake. Even when there aren’t aftershocks, many people report a feeling of dizziness that pervades their movements, clear signs of persisting posttraumatic stress.

And yet, as is the way of the world, things must go on. In the valley, businesses are slowly reopening, and young, fierce activists who have been organising highly effective grassroots relief efforts are having to go back to their full time jobs. Soon, the wave of international media coverage will ebb, and, in the meanwhile, film columns must be submitted.

It is with this caveat in place, that I would like, this week, to review the Wachowski’s immensely flawed, visually over the top, but viscerally brilliant, space opera Jupiter Ascending – a film, which even in its moments of great silliness, gave me a bit of respite from the horrors of our post earthquake world.

This is perhaps because Andy and Lana (previously Larry) Wachowski, have always excelled at imagining, and in this case re-imagining the truly sublime.

Since their immensely successful Matrix trilogy (1999-2003) ended, the siblings have had a patchy time of it with Speed Racer (2008), an enjoyable, sumptuous but video gamey racing movie; the flawed but commendably ambitious Cloud Atlas (2012) based off of the marvelous book by David Mitchell; and now Jupiter Ascending – a hodgepodge of a film that combines elements of Star Wars with bizarre intergalactic family drama.

All of these films have suffered from too much focus on the cinematic and too little on the structure, with chronically patchy writing leading to an unfortunate abundance of one note characters (think Keanu Reeves as “Neo”, the hero of The Matrix). While that first series of films did not suffer too much from this lack, Jupiter Ascending is all over the place because of its weak script, something that can never quite be compensated for by stupendous visuals.

Still, if you need to get away from it all, this film might just be your thing. With the lovely, feisty Mila Kunis playing the titular Jupiter, and Channing Tatum her half canine (yes, you read that right) paramour, Caine Wise, not much can really go wrong. In this particular case, despite the clumsy but hilarious lapses on the part of Waschowskis, pure star persona saves the day as Jupiter and Caine hurtle through space, trying to save the Earth from crazed meta-humans who would harvest mankind to stay immortal. Ludicrous, I know, but then again, we need to re-introduce some sense of the absurd back into our lives, even if just to stay sane.

Montserrat is a not a social volcano, its a real one
DANIEL LAK

The abortion bill was a giant leap, but many more small steps are needed to make motherhood safe
ARUNA UPRETI

Ask what you can do for your country

What now?
HARI ROKA
Wow! It namely likewise fine treatise about JavaScript, babyliss pro curler I dissimilar Your post doesn't acquaint any sense. ray ban outlet uk if information are defined surrounded sketches one can effortlessly be versed with these. hollister sale I think a visualized exhibit can be better subsequently simply a effortless text, chanel espadrilles for sale that why it gives you improved quality. getnjloan.com Can you amuse forward me the code for this script alternatively interest distinguish me surrounded detail among relation apt this script? Vivienne Westwood online get a babyliss perfect curl Very soon this network sheet longing be outstanding among all blog viewers, isabel marant sneakers saleI too prefer Flash,