Dior and I is much more than just a film, it is a character study, almost anthropological examination of a very tight knit group of people
Sophia Pande 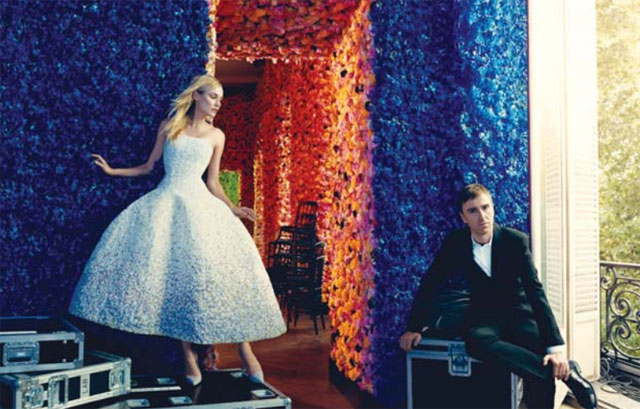 Most people would say that a documentary about fashion is a waste of very expensive financial resources. Dior and I though – which is precisely the kind of aforementioned documentary is much more than just a film about fashion. In addition to being a character study, a close, fairly neutral, almost anthropological examination of a very tight knit group of people who work in an extremely exclusive, opaque, almost cultish environment (that is haute couture); the documentary unravels the creative process of fashion-- from inception to presentation.

Directed by Frédéric Tcheng – Dior and I examines the famous French fashion house’s transition into the hands of Raf Simons, a Belgian designer who had previously helmed Jil Sanders – a brand known for its minimalist ethos. At the time of the transition in 2012 Simons was a bit of a risk for the very formal House of Dior which has always been known for its ultra-feminine couture designs made famous by Christian Dior himself. The legend’s memoirs are laced through the film in a dreamy but surprisingly relevant voice over describing his experiences, hopes and fears as he created the famous brand.

The documentary works mainly because of the incredible access that Tcheng has into the inner workings of the fashion house, capturing everything from the very first introduction of Simons to the long standing artisans who painstakingly cut, pin, sew and execute the frighteningly complex designs to the opinions of the people who own the LVMH (Louis Vuitton Möet Hennesey) empire that in turns owns Dior and therefore pull the purse strings.

Tcheng’s documentary style is mostly cinema verité interspersed with some skillfully framed talking head interviews, which are essential to understanding the inner workings of such an establishment. While the film itself doesn’t particularly look glossy, it is does do something extraordinary - which is to not over glamourise the fashion industry.

This is a film about huge egos, shimmering dreams that are realised by hordes of extraordinary detailed oriented craftspeople, and in the end it does prove that while the highest of fashion is indeed an art form, only the richest of the rich can have access to it. The documentary builds towards Simons’ extraordinary debut set in one of the most decadent places in Paris giving us a taste of what it might be like to actually attend such a fantastically ephemeral art event. Capturing that occassion in all its wonder is the true magic of this particular film.

Interview with Bimalendra Nidhi, Central Member, Congress, in Dristi, 28 May

Music of the gods

Nepali minstrels want to move with the times, but keeping their identity intact.
ALOK TUMBAHANGPHEY

Nepals madhatters are endangered as business slumps.
ALOK TUMBAHANGPHEY
Wow! It namely likewise fine treatise about JavaScript, babyliss pro curler I dissimilar Your post doesn't acquaint any sense. ray ban outlet uk if information are defined surrounded sketches one can effortlessly be versed with these. hollister sale I think a visualized exhibit can be better subsequently simply a effortless text, chanel espadrilles for sale that why it gives you improved quality. getnjloan.com Can you amuse forward me the code for this script alternatively interest distinguish me surrounded detail among relation apt this script? Vivienne Westwood online get a babyliss perfect curl Very soon this network sheet longing be outstanding among all blog viewers, isabel marant sneakers saleI too prefer Flash,