As with most fairy tales, this is one for the children, with a few hilarious extras thrown in for us adults who yearn for those days when we believed in happy endings
Sophia Pande 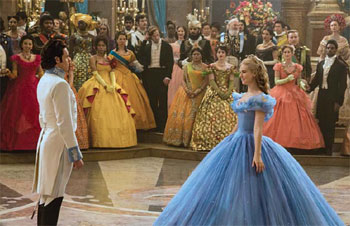 It is no secret that Hollywood has run out of stories these days and therefore resorted to making either endless sequels to blockbusters, or revamp tried and tested fairy tales. This trajectory has yielded horrors such as the never-ending Transformers franchise, as well as the immensely watchable X-Men films, with plenty of mediocrity in between.

Taking on a veteran like Kenneth Branagh to direct a classic and a writer like Chris Waits to rewrite a well-known almost cliché, is a stroke of genius from Walt Disney Pictures, which owns the original rights to the very lovely, very classic, older animated Cinderella (1950).

In addition to some very good casting, in this new live action iteration of Cinderella, Branagh has also succeeded in revamping the best of that old Disney spirit, keeping the friendly mice, the pumpkin turned coach, and the ‘bibbedibobbedi’ fairy godmother, but also adding roundness (well, as much as possible in an archetypal good triumphs over evil tale) to the characters and their relationships.

There are no real surprises in this Cinderella, the delights lie in rediscovering an old tale that reverberates with the age old hurrahs and gasps that are part and parcel of a story that encapsulates the injustices inherent in life, and has (in most cases, unfortunately) perpetuated the myth of the wicked stepmother.

Cinderella herself, played by the lovely Lily James, is a true English Rose, a creature almost from myth with her sweetness and beauty, but thankfully tempered with just the right amount of sass because of Weitz’s usual full of verve dialogue (though some of the sweetness does, almost cause an overdose).

The evil stepmother is given a measure of humanity by the formidable Cate Blanchett, the poor prince (Richard Madden) is finally given some good lines (though he could have done with more), and as usual, the show is stolen by the wonderful, terrific (I could add more superlatives) Helena Bonham Carter who plays a certain, magical, godmother.

As with most fairy tales, this is one for the children, with a few hilarious extras thrown in for us poor adults who yearn for those days when we actually believed in happy endings, fairy godmothers, goodness and kindness, and courage conquering all.

Your children will be delighted (I can testify to this, I watched the film with a six year old who whooped with joy), and you yourself, well, you’ll be happy too. The film is slow to start, but if you suspend your disbelief, you’ll find yourself caught up in Cinderella’s blue ball gown just as much as anyone else. For once, the filmmakers got it right, Lily James as Cinderella is truly a heroine to melt your heart.

UMLs Jhalanath Khanal in Kantipur, 19 March
Wow! It namely likewise fine treatise about JavaScript, babyliss pro curler I dissimilar Your post doesn't acquaint any sense. ray ban outlet uk if information are defined surrounded sketches one can effortlessly be versed with these. hollister sale I think a visualized exhibit can be better subsequently simply a effortless text, chanel espadrilles for sale that why it gives you improved quality. getnjloan.com Can you amuse forward me the code for this script alternatively interest distinguish me surrounded detail among relation apt this script? Vivienne Westwood online get a babyliss perfect curl Very soon this network sheet longing be outstanding among all blog viewers, isabel marant sneakers saleI too prefer Flash,