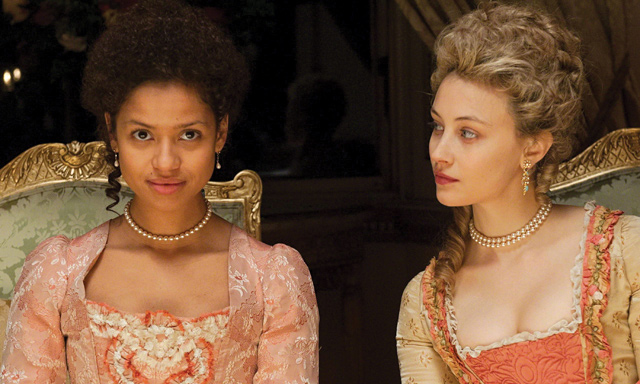 At first I was a bit hesitant to write about Belle a period drama from 2013 that is gorgeous and entrancing in its attention to period details, with an ensemble cast to match, but strays quite liberally from the life of the main character whom it is trying to depict.

Dido Elizabeth Belle (played by the very beautiful Gugu Mbatha-Raw) was born illegitimately from a black West Indian mother and Captain Sir John Lindsay (Matthew Goode), the nephew of William Murray (Tom Wilkinson), the Lord Chief Justice of England in the late 18th century and the 1st Earl of Mansfield. Very little is known about her real life – aside from the extraordinary fact that her father, once he located her after her mother’s death, placed her in the hands of his uncle, who brought her up side by side with his other legitimate niece, Lady Elizabeth Murray (Sarah Gadon). The film itself is inspired by a portrait of the two young women side by side, commissioned by their grand uncle William.

As Dido grows and blossoms, her family are confronted with the almost ubiquitous prejudices that she will face from “genteel” society, who cannot even look at her, refined and charming as she is, without sneering. Meanwhile, in this mostly fictionalised account of her life, her cousin Elizabeth is seen as the epitome of an English rose, even while Dido is as beautiful and clearly the brainier of the two. Things start to become slightly more complicated between the two girls, who are very close, when Dido inherits a very significant annual income from her late father while Elizabeth remains penniless, disinherited by a disinterested father who has left her for his new wife and younger son. It is with the news of this inheritance that Dido finally begins to gain notice in society, a development that quickly exposes the venality of upper-crust English society at the time.

Dido struggles through humiliations and quickly become caught up in the politics of slavery, reading her grand uncle’s law briefs and extrapolating essential information that helps to swing a crucial case against those who would ship in slaves in the worst conditions.

This is one of those films that is made with great care and even while it may err towards simplicity to make the viewer feel good, it still addresses, with subtlety, the egregious racial prejudices in the history of the human race. “Belle” may not be accurate, but it is worthy film: enjoyable, romantic, horrifying, and uplifting all the same time, made so by Mbatha-Raw’s nuanced portrayal of an intrepid woman who would not allow the circumstances of her birth and her skin colour stop her from trying to make a difference.

Rajdhani, 30 January
Wow! It namely likewise fine treatise about JavaScript, babyliss pro curler I dissimilar Your post doesn't acquaint any sense. ray ban outlet uk if information are defined surrounded sketches one can effortlessly be versed with these. hollister sale I think a visualized exhibit can be better subsequently simply a effortless text, chanel espadrilles for sale that why it gives you improved quality. getnjloan.com Can you amuse forward me the code for this script alternatively interest distinguish me surrounded detail among relation apt this script? Vivienne Westwood online get a babyliss perfect curl Very soon this network sheet longing be outstanding among all blog viewers, isabel marant sneakers saleI too prefer Flash,