To cut a long story short, Assassin’s Creed is surprisingly well made and fairly engrossing if you start watching it with very low expectations.
Sophia Pande 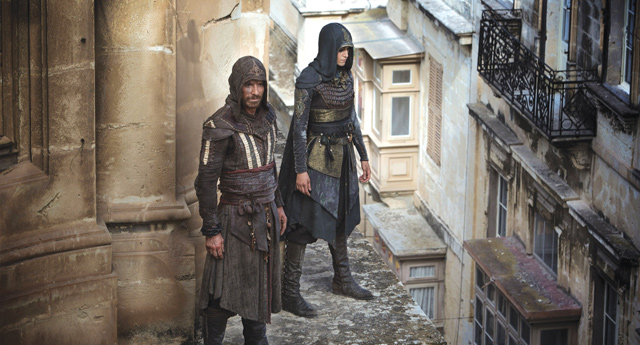 Taking a break from the season’s “serious” award-nominated films, let us examine Assassin’s Creed, 2016’s end of year action film based on a wildly popular video game. It stars Michael Fassbender and Marion Cotillard, two extremely serious actors who effortlessly jump between well-respected, independent cinema and the silver screen, and are the closest thing to the truly glamorous, old-fashioned stars of cinema’s golden era.

It is therefore surprising that these two particular, old school thespians would agree to star in such a franchise (sequels are already projected: the film grossed $241 million against a budget of $125 million) that is already an extension of another franchise based on a series of video games that play on rudimentary (read childish) tropes of the Templar and Assassin mythologies.

To cut a long story short, Assassin’s Creed is surprisingly well made and fairly engrossing if you start watching it with very low expectations. There is the usual preposterous storyline: Fassbender plays Callum Lynch, a convict with violent tendencies who is put to death for his grim crimes – apparently he is genetically pre-disposed to violence. He wakes up alive, in Spain, in an uber-futuristic facility where he is told by the lovely Sofia (Cotillard) that he has been chosen for his gene code. It links him to his medieval ancestor Aguilar de Nehra, an “Assassin” of the “Creed” who is sworn to protect human free will against the uptight Templars, who wish to control humanity for the sake of peace.

Sofia is apparently both brilliant and beautiful, so confoundingly clever in fact that she has created the Animus, a contraption that can simulate the past when someone of a similar enough genetic code is hooked up to it (there is no real explanation for how it works). Hence Cal’s ability to access Aguilar’s past, and locate the mysterious “Apple”: the kernel of temptation that holds the secret of free will. Sound kooky? It is, but surprisingly one is willing enough to go along; after all it is a video game.

We are swept up in Cal and Sofia’s interfaces as they search for the desired object through 15th-Century Spain, a treat for the viewer, even as we must forcibly suspend our disbelief. The script though, continues to unravel, and while Fassbender and Cotillard grit their teeth and do their very best, the ridiculous relationships, particularly between Sofia and her incredibly self-centred father Allan Rikkin (played by a cold Jeremy Irons), finally entangle the storyline – there is no way out.

As mindless action films go, Assassin’s Creed is really not that bad. It lacks a sense of humour, and it is dreadfully motivated, but you can tolerate it on a lazy afternoon; that is, until it suddenly ends, in media res, leaving you indignant and wondering why you had invested so much in a film about a video game about assassins and cults, and apples.

Sports chatter is a substitute for political chatter, itself an imposter
RABI THAPA
Wow! It namely likewise fine treatise about JavaScript, babyliss pro curler I dissimilar Your post doesn't acquaint any sense. ray ban outlet uk if information are defined surrounded sketches one can effortlessly be versed with these. hollister sale I think a visualized exhibit can be better subsequently simply a effortless text, chanel espadrilles for sale that why it gives you improved quality. getnjloan.com Can you amuse forward me the code for this script alternatively interest distinguish me surrounded detail among relation apt this script? Vivienne Westwood online get a babyliss perfect curl Very soon this network sheet longing be outstanding among all blog viewers, isabel marant sneakers saleI too prefer Flash,