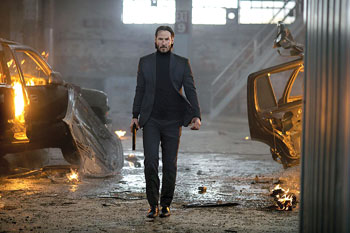 This week, because I am travelling and therefore have a low attention span, I will be writing about John Wick, Keanu Reeves’ highly anticipated, slightly disappointing, action flick with art-house pretensions.

In all fairness to Reeves, whom I have had a sneaking fondness ever since I learnt that he played an excellent Hamlet on stage in 1995, John Wick (where Reeves plays the titular character, of course) is far from his worst role, especially as it requires a minimal amount of talking, and a maximum amount of action involving, guns, knives, driving fast cars, and a tiny bit of interaction with cute puppies.

John Wick starts off with Reeves collapsed on a dock with a grievous wound to the gut, looking into his phone at a video of a beautiful woman who is teasing him lovingly. As the film flashes back, we learn that Helen (played all too briefly by the lovely Bridget Moynihan) has died after a long illness leaving Wick alone, devastated by the loss of the only good thing in his life – mainly because before his five happy years with Helen – Wick had been the hetman for a Russian crime syndicate in New York. That too, an extremely efficient one who earned himself the nickname “Baba Yaga” or “The Boogeyman” due to his ferocity and precision.

When circumstances conspire, slightly forcedly, in getting his car stolen and his puppy being maimed by Iosef (Alfie Allen), the good for nothing son of his former mob boss, Wick goes ballistic, literally, stocking up on his arsenal to avenge a number of wrongs.

Personally, if you like stylised violence, I would advise you to watch all of the French director Jean-Pierre Melville’s works starting with Le Samouraï (1967) and Le Cercle Rouge (1970), two of the most iconic works in cinema related to art-house action. His work was influenced in turn by American gangster flicks of that era, and starred the strikingly handsome Alain Delon in some of his most unforgettable roles.

John Wick’s influences from Melville are clear. Director Chad Stahelski is surely influenced by the perfectly lit, cool art deco interiors that are so much a part of Melville’s films, with their insouciant, almost cheeky, characters who are fascinating in their seeming opacity.

Eventually, when Iosef turns up holed up in a club called the “The Red Circle” my guesses at the film’s influences were more or less vindicated (Le Cercle Rouge is translated as “The Red Circle”).

Action films are a dime a dozen these days, unfortunately most are less than mediocre. If you must, watch John Wick, but if you want to be riveted, watch Melville. Most likely you’ll never watch another action flick after that without a spark of nostalgia for the good old days.

"Doing nothing is not an option"

Where the earthquake will hit the hardest