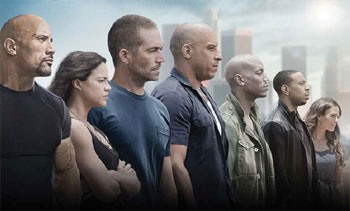 When the unassuming but handsome, and above all loveable, Paul Walker died, partway through the filming of Furious 7, the latest sequel of an immensely successful franchise of which he is one of the pivotal stars, most people were horrified by the nature of his accident: in a speeding car, not driven by himself, that crashed into a tree killing both people instantaneously.

Walker’s death was an immense loss to the Fast and Furious series, which ostensibly is about fast cars and furious men, but includes a fairly balanced dose of family values, romance and, in this particular installment, some jaw dropping, completely tongue-in-cheek action sequences that will make your eyes pop out as you grip your seat in delighted disbelief.

The producers decided not to have Brian O’Connor (Walker’s character) die in the film, a smart decision that grips the audience throughout the film, our hearts aching at the blonde, good-natured specter of a now deceased, but incredibly charismatic actor; nobody wants to see Brian O’Conner die onscreen, his death off-screen is already too much for his admirers.

Even if you are not a fan of the series, I would still urge you to go see this one. While it is a tad too long, the stunts, the camaraderie between a multi-ethnic cast that includes Michelle Rodriguez (as Letty), Vin Diesel (as Dom), Dwayne Johnson (as Luke Hobbs), Tyrese Gibson (as Roman Pearce), Ludacris (as Tej Parker), with the additions of Jason Statham (as a baddie), a canny, savvy Kurt Russell (as a mysterious, nebulous government agent), and the solid storyline, albeit a bit clichéd, but leavened by the astonishingly paced action packed set pieces, leaves something for everybody to delight in, unless you really have no sense of humour and no appreciation for the truly ridiculous.

Furious 7 is far from a perfect film. Yet, against all odds, and a terrible tragedy, this is a film that will undoubtedly become a cult classic and not just because it memorialises Paul Walker. Directed with a surprising lightness of touch, considering the heaviness of the mechanics involved in the action sequences, James Wan, a newcomer to the franchise that has been mostly honed in its style by Justin Lin (who directed four of the seven films), manages to keep the furious, heart-stoppingly exciting action sequences balanced with surprisingly reasonable, believable dialogue.

As the film comes to a close, everyone’s hearts will tighten, unless you really are the ultimate sceptic, and if that is the case, you really shouldn’t be in a theater watching a film that is mainly about fast, beautiful cars and the people that love them.

Our efforts to protect the snow leopard will only work once we look beyond just the big cat.
SOM B ALE

Castling: A special defensive manoeuvre in chess during which the king and the rook move together. If not followed up properly, it can be a trap.
KUNDA DIXIT

The army and the Maoists are engaged in a lethal arms race.
NAVIN SINGH KHADKA

Over-stretched and plagued by past mistakes, the national airline struggles to pull out of a nosedive.
PRAGYA SHRESTHA
Wow! It namely likewise fine treatise about JavaScript, babyliss pro curler I dissimilar Your post doesn't acquaint any sense. ray ban outlet uk if information are defined surrounded sketches one can effortlessly be versed with these. hollister sale I think a visualized exhibit can be better subsequently simply a effortless text, chanel espadrilles for sale that why it gives you improved quality. getnjloan.com Can you amuse forward me the code for this script alternatively interest distinguish me surrounded detail among relation apt this script? Vivienne Westwood online get a babyliss perfect curl Very soon this network sheet longing be outstanding among all blog viewers, isabel marant sneakers saleI too prefer Flash,