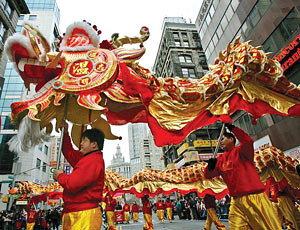 For those unfamiliar with the Chinese calendar, this week marks the traditional Lunar New Year, a time for fun, family, and feasting. 2013 is the Year of the Snake, replacing the Year of the Dragon in 2012.

According to traditional Chinese beliefs, each year in the calendar is assigned one of twelve animals, and it is thought that these may have an influence on one’s personality, character quirks, and fortune for the year ahead. For example, those born in 1965, 1977, 1989, and 2001 are said to be ‘snakes’. An additional element of fire, wood, water, earth or metal is also assigned depending on a two year cycle.

Astrologists have predicted that this year is particularly auspicious for ‘Water Snakes’. All the other serpents will have a smooth sailing in their businesses and personal relations. If you are not sure of your Chinese animal avatar, enlightenment is only a mouse click away.

The Lunar New Year is one of the biggest holidays celebrated within China, and around the world where there is a significant community of ethnic Chinese, such as Southeast Asia or California in the United States. An estimated 700 million people in China alone will travel back home to their villages and towns to visit their ageing parents and relatives.

The Lunar New Year isn’t an officially recognised holiday here in Nepal, but ethnic Chinese residents still find time to celebrate. Professor Zhang Shubin, director of the Confucius Institute at Kathmandu University, recently threw a party on 26 January with traditional games, songs, and poetry recitals. Although you won’t be seeing the popular lion dances and firecrackers on the streets of Kathmandu, with more and more young Nepalis fascinated with Chinese culture and languages, the festivities are likely to catch up. And for those of you who want to experience the real deal, a short trip to China at this time of year might not be a bad idea. You will get a taste of the culture and tradition minus the crowd, chaos, and pollution.

For restaurants and caterers serving Chinese food, the New Year is traditionally the busiest and most profitable time of the year. Many Chinese families take advantage of their extended leave from work to travel abroad and neighbouring Nepal has always been a popular destination.

The Chinese have given you the perfect excuse to party, so what are you waiting for? Gather your friends and family, head out to Tian Rui (see Page 9) or the nearest Chinese establishment this Sunday and ring in a Snaky New Year. Xin Nian Kuai Le!

Inequality is entrenched because our orthodoxy bases its principles on an accident of birth, rather than merit.

If he is really smart, Surya Bahadur Thapa will reinstate parliament.
CK LAL

"The customer is boss"

Sugat R Kansakar-Managing Director of the NTCs new avatar.
Wow! It namely likewise fine treatise about JavaScript, babyliss pro curler I dissimilar Your post doesn't acquaint any sense. ray ban outlet uk if information are defined surrounded sketches one can effortlessly be versed with these. hollister sale I think a visualized exhibit can be better subsequently simply a effortless text, chanel espadrilles for sale that why it gives you improved quality. getnjloan.com Can you amuse forward me the code for this script alternatively interest distinguish me surrounded detail among relation apt this script? Vivienne Westwood online get a babyliss perfect curl Very soon this network sheet longing be outstanding among all blog viewers, isabel marant sneakers saleI too prefer Flash,