Many hospitals in Nepal and India vie for Nepali patients, but Christian Medical College stands out as one of the best
Dhanvantari by Buddha Basnyat, MD 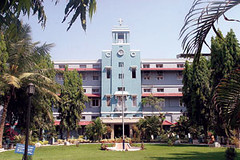 For years, Christian Medical College (CMC) Hospital in Vellore used to be the definitive medical centre for Nepalis who could afford a trip to south India. And Nepali doctors would frequently refer complicated cases to their counterparts in CMC.

For example, if a patient at Patan Hospital (back then Shanta Bhawan Hospital) was diagnosed with lung cancer, she would travel to Vellore (if she had the financial resources) to confirm or in many cases refute the verdict.

Today there are many other hospitals in Nepal and India that vie for Nepali patients, but CMC still stands out as one of the best. Competent and compassionate staff, and affordability mean that most patients stay loyal.

CMC hospital was started in the early 1900s by Ida Scudder, a third-generation American missionary doctor. Initially, she had no interest in carrying on the family profession. However, one day while visiting her doctor father in south India, she saw the husbands of three pregnant patients refuse to show their wives to her father because he was a man. Tragically the three women died of obstructed labour (a major killer in Nepal even today) and birth complications that night.

This incident proved to be a huge turning point for Ida. She went to the US, completed her medical studies from Cornell University in 1899, and returned to establish the CMC which continues to serve the health care needs of many rich and poor patients in South Asia.

The hospital today boasts of departments like microbiology (study of pathogens such as bacteria, viruses, fungus) that are second to none in India. As microbiology is one of the most neglected areas of medicine in the subcontinent, many doctors prescribe drugs empirically based on clinical history and examinations. However, this prescription is often inadequate because in certain situations knowing a suspected organism’s sensitivity or resistance to a particular drug can be vital, especially when one is dealing with ‘killer’ bugs like mycobacterium tuberculosis.

While hospitals like the well-appointed Hinduja in Mumbai also boast reliable microbiology laboratories, they charge exorbitant fees. New, modern Nepali hospitals with state of the art microbiology units are coming up, but it will take some time before they can replicate CMC’s level of excellence and success.

Excerpts of interview with Harka Gurung in  Himal Khabarpatrika, 13-27 February

Nepal Samacharpatra, 9 February
Wow! It namely likewise fine treatise about JavaScript, babyliss pro curler I dissimilar Your post doesn't acquaint any sense. ray ban outlet uk if information are defined surrounded sketches one can effortlessly be versed with these. hollister sale I think a visualized exhibit can be better subsequently simply a effortless text, chanel espadrilles for sale that why it gives you improved quality. getnjloan.com Can you amuse forward me the code for this script alternatively interest distinguish me surrounded detail among relation apt this script? Vivienne Westwood online get a babyliss perfect curl Very soon this network sheet longing be outstanding among all blog viewers, isabel marant sneakers saleI too prefer Flash,