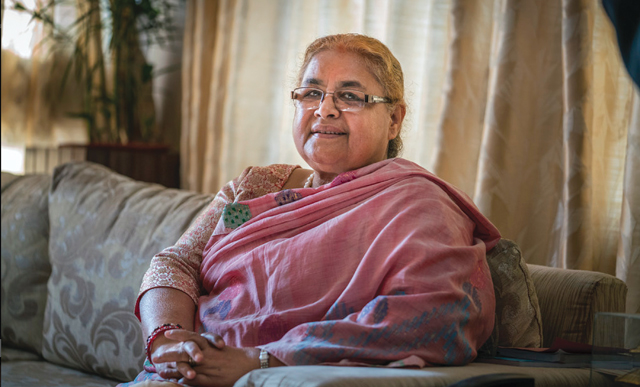 BBC Nepali: How difficult was your journey to the post of Chief Justice?

Sushila Karki: In the legal profession you do not have a godfather. You have to have an in-built capacity to excel in this field. I was chosen as a Supreme Court justice because I had served as an advocate for 31 years, and there were only a few women in this field.

How challenging was it for a woman to study law in Nepal 40 years ago?

Only a couple of women were studying law at that time, and they were all in Kathmandu. I was lucky because my family was liberal-minded and never discriminated against daughters. My father initially wanted me to be a doctor, but later encouraged me to study law. I began practicing law in Biratnagar.

What is the current status of women in Nepal?

They are still left behind, more so in rural areas. The state and the society must be responsible to uplift the status of women.

You once talked about an unpleasant experience as a woman justice among male colleagues in the Supreme Court.

Our society is still unwilling to tolerate the progress that women make, and does not believe that a woman can hold a top post. I worked with several Chief Justices, and some of them treated me like a token female. They thought I was handpicked only because I was a woman, and to fill the gender quota in the judiciary. They did not forward important cases to my bench. Luckily, there were other Chief Justices who were better.

What are you doing to end discrimination against women in the justice system?

As Nepal’s first female Chief Justice, I am working hard to prove that a woman can be as capable as a man. Forwarding cases to justices and fixing dates for them is a vital function of any court. Since I became Chief Justice, the SC has been clearing a backlog of cases by fixing timings from 10 AM onwards. Some of my predecessors used to forward cases only in the afternoon.

Some say you believe in positive discrimination and prefer a woman to a man if both are equally capable. Is it true?

I have not chosen a less qualified woman instead of a qualified man. However, I believe that women should be given a fair chance; it should be a level playing field.

Does this translate into leniency towards women in verdicts?

No. But if a woman is constantly tortured by her husband and she kills him, we should also take into account her suffering while passing a sentence on her. Can that be really called favoritism towards women?

Why are you advocating for free legal service for victims of gender-based violence?

Women are shy about fighting for justice because of family pressure, lengthy legal process and expensive fees of advocates. More women will be encouraged to fight for justice if they do not have to pay.

You recently said you preferred to promote professionalism of women rather than their proportional representation. Why?

Your husband once said in an interview that you are the breadwinner of the family and he just does household chores. Is your family matriarchal?

My husband always treats me as the head of the household. I earn and he takes care of the house. He raised our children. When I was practicing law and needed to study legal documents till late night, he used to make tea for me. I manage the money. My husband is like a hermit. He was never tempted to earn money. The clothes that he wears are his only property.

Most women want to marry rich and successful men. You married an idealistic politician.

Yes, I was impressed by his ideals and honesty. I thought I could make a living by myself and did not need a husband who had a salary. Had I married someone else, it could have been different. If my husband had been greedy, liked to drink, or boast about power I would probably not be where I am today.

Al Jazeera documentary humanises the statistics of the peace process
Wow! It namely likewise fine treatise about JavaScript, babyliss pro curler I dissimilar Your post doesn't acquaint any sense. ray ban outlet uk if information are defined surrounded sketches one can effortlessly be versed with these. hollister sale I think a visualized exhibit can be better subsequently simply a effortless text, chanel espadrilles for sale that why it gives you improved quality. getnjloan.com Can you amuse forward me the code for this script alternatively interest distinguish me surrounded detail among relation apt this script? Vivienne Westwood online get a babyliss perfect curl Very soon this network sheet longing be outstanding among all blog viewers, isabel marant sneakers saleI too prefer Flash,