Everest Bank, a joint venture with India’s Punjab National Bank, is heavily involved in helping finance Nepal’s trade with India and other countries. CEO PK Mohapatra, spoke to Nepali Times this week about the difficulties in keeping tabs on remittances from India, Nepal’s inability to boost capital formation, and why agriculture in Nepal needs a boost. 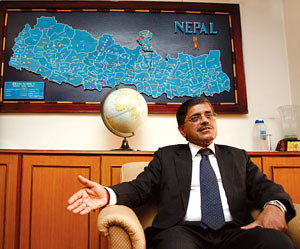 We feel that approximately 60 per cent is received through official banking channels, and our bank channelises around NPR 20 billion a year. SBI Nepal gets another NPR 45 billion approximately. In addition there are withdrawals made from ATMs in Nepal by family members in Nepal from account holders earning in India. The system doesn’t catch all of that.

How important for Nepal are remittances from India?

See, it’s a simple correlation. Approximately 67 per cent of Nepal’s imports come from India, and since there is a big deficit in the country’s balance of trade with India, remittances are crucial to pay for the said imports. The shortfall is made up for by exchanging US dollars for Indian rupees. Nepal’s economy has large dependence on remittance.

But the shortage of INR has set off a black market for Indian currency, putting pressure on the fixed exchange rate with NPR.

Yes, but the beauty of the fixed exchange rate is that the Nepali remitters in India do not have to worry about exchange rate fluctuation. The black market is due to a demand-supply mismatch which in turn is caused by the trade imbalance. Tampering with the exchange rate by devaluing the NPR would benefit the Nepali worker in India, but it would have an adverse effect on the economy as a whole with inflationary pressure right across all the sectors of the economy on a short to medium term perspective.

But the migrant economy also has downsides?

Precisely. I have been travelling throughout Nepal and one can see the social impact on communities and families of the migrant population. There is additionally the adverse effect on the availability of labour and on the agriculture sector. A major part of the money sent home is spent on consumption since there isn’t much of a habit of long-term saving.

So the net contribution to the national economy is not so significant?

When remittances are mostly spent on consumption there is no commensurate capital formation. It is spent on buying consumer goods, which are mostly imported so the money goes right back out. Despite that the role can’t be termed insignificant. The national strategy should however be to use the funds from remittances to create jobs so people won’t have to migrate.

What should the government do?

From a banker’s view, emphasis should be on financial literacy, that is people should be educated in saving for the long-term. This will help in investment which will lead to creation of new jobs. Secondly, the government should increase spending on infrastructure which will act as a catalyst for further growth and creation of jobs. The third important issue is skill upgradation. If the youth interested to migrate can even be taught simple skills, their capacity will increase resulting in increased remittance. And lastly, the industrial environment in the country should be improved to encourage new investment and capacity addition which will encourage the youth to work in their own motherland. Nepal has the potential to bounce back with investments in hydropower, IT, and service sector.

How badly is the banking sector affected?

Banking is a cyclical business. In Nepal, there was a spurt of growth in a short time. The system had to cope with new technology, young managers with limited experience, and promoter businessmen with limited exposure to running banks. This resulted in a large number of banks competing with one another for a restricted business potential. The problem was compounded by the issue of corporate governance. However, as is everywhere, the system is learning from past experience and getting through the process of consolidation. As the regulator, Nepal Rastra Bank is also on a learning curve and is taking corrective action to protect depositors and making the system robust.

On balance, it looks like you are cautiously optimistic about Nepal’s future?

There is cause for optimism. Hydropower has tremendous potential, and with the Nepal Investment Board taking charge, a lot of hurdles are being removed. The country’s fortune is linked to the service sector which includes hospitality, information technology, health care etc. But the sector crying for immediate help is agriculture. Investment in agriculture and agro-based industries is critical to create jobs and arrest migration of productive labour. And last, but most importantly, we need a paradigm shift in the mindset of the younger generation and that can only come about with long-term investment in quality education.

Editorial in Nayapatrika, 14 August
Wow! It namely likewise fine treatise about JavaScript, babyliss pro curler I dissimilar Your post doesn't acquaint any sense. ray ban outlet uk if information are defined surrounded sketches one can effortlessly be versed with these. hollister sale I think a visualized exhibit can be better subsequently simply a effortless text, chanel espadrilles for sale that why it gives you improved quality. getnjloan.com Can you amuse forward me the code for this script alternatively interest distinguish me surrounded detail among relation apt this script? Vivienne Westwood online get a babyliss perfect curl Very soon this network sheet longing be outstanding among all blog viewers, isabel marant sneakers saleI too prefer Flash,