“Himal, Pahad, Tarai need each other”

CPN-UML Chairman KP Oli is juggling the constitution with an internal feud within his party. Oli spoke to Anurag Acharya this week, packing a few punches despite ill health. 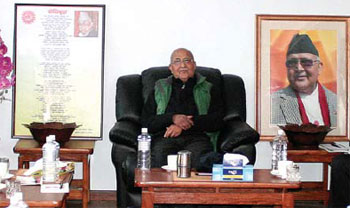 Nepali Times: Your party colleagues seem unhappy with you?

KP Oli: For a long time, the party was being run by a few as their fiefdom. Now that situation has changed. So, they are bound to be upset but that doesn’t mean we are divided. We are a big party we cannot satisfy everybody’s ambition.

How do you evaluate the performance of PM Sushil Koirala?

The NC hasn’t paid enough attention to governance, true. But we are now concentrating on constitution drafting and we missed the deadline because the constitutional dialogue committee, which was supposed to resolve the deadlock, was being headed by someone who was responsible for dissolving the last CA.

Was there an agreement that the UML would lead the government after the January deadline.

If we had wanted to, we could have made government leadership an issue after January. But we chose not to because our priority for now is constitution drafting and we want to concentrate on that. We are a big party with a big heart. We don’t squabble for political appointments. We have five priorities: ensuring peace, establishing democratic systems, ensuring equity and social justice, establishing social harmony and fighting poverty. It is not important who comes to power, as long as these priorities are addressed.

The UML stood for directly-elected executive Prime Minister in the constitution which was mentioned in your election manifesto. Has that position changed?

Sometimes, decisions within the party are taken without sufficient homework, at other times we compromise for consensus. As long as our priorities are met, we are ready to compromise on any issue. Our decisions are dynamic and evolving. The UML is open for negotiation and willing to compromise on any contentious issue, including models of federalism.

When it comes to defining nationalism and identity, the opposition and the ruling coalition have widely different views. How will you find a compromise?

There is an internationally accepted definition of identity. It does not permit discord and disharmony in its name. A person’s identity is not independent but a part of his/her national identity. The question is: whose identity needs to be protected more?

How is the issue of the five disputed districts going to be resolved?

Our task is to federate 75 districts of the country into a number of provinces that are feasible for governance. Nobody should make the number an issue for their egos. The purpose of federalism is to devolve power, empower the people and protect their rights. It is for the direct participation of the people in their governance process. This is a country of Himal, Pahad and Tarai, a multi-lingual and multi-cultural society. We must maintain this character.

But there are also demands for geographical autonomy, particularly in the Madhes. Don’t you think these are legitimate demands?

We have a President and a Vice-President from the Madhes, the Chief-Justice is a Madhesi. So many of the CA representatives are from the Madhes. Is there a demand for Himal province? We must take decisions based on our national interest. Nepal’s Himal and Pahad have water resources, the Tarai has agriculture. All three need each other.

But, we are not talking of separation.

The PM's  speech was rich in rhetoric but otherwise empty

Jurisdiction of the judiciary

How do the various political parties see the role of the judiciary in the new constitution?