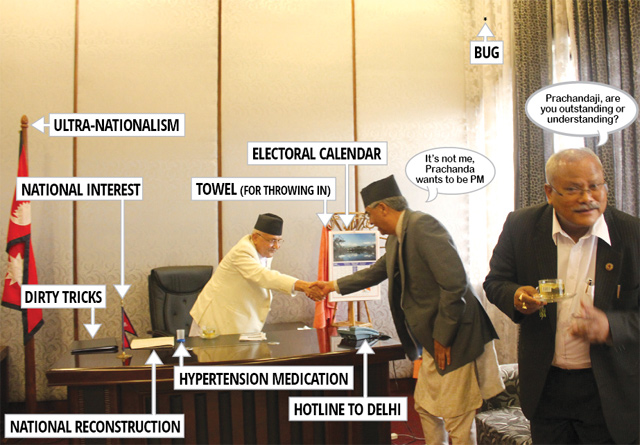 The capital is suddenly agog again with talk of a new government to replace the current coalition led by Prime Minister Oli. Two months after Oli deftly defused a NC-Maoist attempt to dislodge him, the grumbling is getting louder again. What is focusing everyone’s attention is December 2017 — by when there are supposed to be three elections. Letting the UML use the nationalism card, spend on populist projects under the new budget, and have the incumbent advantage in campaigning would make Oli stronger, they feel.

The NC’s Sher Bahadur Deuba, under pressure from his own party, wants to be prime minister for the fourth time by replacing Oli. If that cannot be achieved, he is willing to let Pushpa Kamal Dahal lead a coalition that will include the NC.

Dahal, who postponed his Australia trip last week because of fear of arrest for wartime atrocities, is worried about the Truth and Reconciliation Commission. By being prime minister, he feels he can gain immunity from prosecution. The likes of Ram Bahadur Thapa — who recently returned to the mother party — and Narayan Kaji Shrestha are also in a hurry to throw Oli out.

Shrestha told us: “Neither the NC nor the UML is in a position to form a unity government, so our party has a chance. If that does not happen, we are open to forming a new government with the NC, and the Madhesis.”

But Deuba still feels betrayed, and does not think Dahal could be a reliable partner in a new coalition. Gyanendra Karki, one of Deuba’s confidantes, said: “Let the Maoists pull out first, then we will think of a possible coalition with them.”

Kamal Thapa of the RPP-N appears to be already on the campaign trail, speaking at rallies supporting the restoration of a Hindu state, and hoping that this will be seen favourably by the Narendra Modi government in India.

Meanwhile, the Madhesi parties are trying (not so successfully) to maintain their movement’s momentum. They need a safe landing, which will only happen with Oli’s departure. If the current situation continues, the fractious Madhesi Front will see its power base in the Tarai eroded by radicals as well as mainstream parties — especially the RPP-N with its Hindu agenda. At stake is the enormous vote bank representing the 5 million people of Province 2 of the eastern Tarai.

The rise of the diaspora

Nepal's fastest-growing bank braces itself for effects of global downturn

A 'New Nepal' is over-promised and under-delivered
ASHUTOSH TIWARI
Wow! It namely likewise fine treatise about JavaScript, babyliss pro curler I dissimilar Your post doesn't acquaint any sense. ray ban outlet uk if information are defined surrounded sketches one can effortlessly be versed with these. hollister sale I think a visualized exhibit can be better subsequently simply a effortless text, chanel espadrilles for sale that why it gives you improved quality. getnjloan.com Can you amuse forward me the code for this script alternatively interest distinguish me surrounded detail among relation apt this script? Vivienne Westwood online get a babyliss perfect curl Very soon this network sheet longing be outstanding among all blog viewers, isabel marant sneakers saleI too prefer Flash,