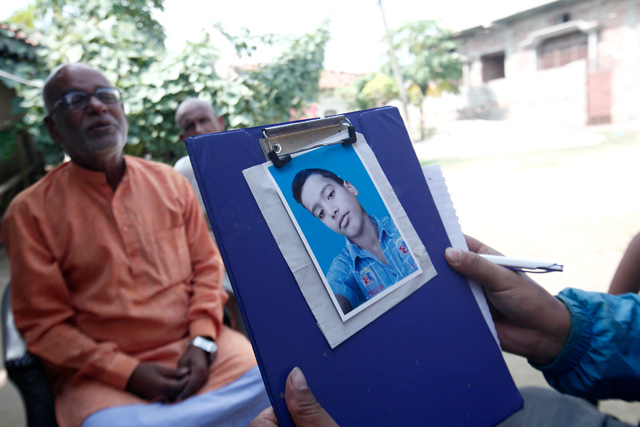 As the waters of last month’s devastating floods recede, bodies of the missing are starting to appear. Guddu Kumar Singh, 12, was washed away on 13 August, and his body was found in Sirisiya near the Indian border. His mother is so traumatised she has been hospitalised, and his father is looking after her. Guddu’s grandfather, Mahendra Singh, is alone at their flood-ravaged home with just the boy’s photo as a memory (above).

Singh blames the 10m-high levee on the Indian side of the border for the rising waters that killed his grandson and dozens of others here. “We never had to worry about floods before India built that embankment on No Man’s Land,” he says bitterly.

When it rained heavily for four consecutive days starting 11 August, much of Nepal’s southern plains were inundated with water that flowed out through breached embankments on Tarai rivers. The exits to the flood waters were then blocked by east-west levees built across the border in India.

In Rautahat, over 70% of the land was under water for days. In Saptari, four people were killed and nearly 35,000 families displaced. In both districts there are many embankments, elevated roads, dams and other infrastructure restraining the water flow.

Damage was relatively less in Siraha, with no deaths and only about 1,800 families affected. Locals say this is because they didn’t allow the Indian side to build a levee. “Our struggle paid off this time,” says Raj Dev Yadav, who staged a sit-in against construction of a levee in a village across the border in 2012.

Flood survivors are angry at India for causing the floods, but angrier at their own leaders for indifference. In Saptari, 62-year-old Kisun Dev Raya asks: “Where are the Madhesi leaders? They used to claim to represent us.”

With elections for Province 2 due in two weeks, Madhesi leaders in turn blame Kathmandu for doing nothing. Abhi Ram Sharma of the RJPN in Mahottari, says: “We want the government to form a reconstruction authority, just like after the earthquake. We cannot help people on our own: this is not our job.”

In New Delhi last week, Prime Minister Deuba discussed with Indian Prime Minister Modi measures to tackle recurring floods. But the locals believe it was just “empty talk”. Deuba was also meeting Bihar Chief Minister Nitish Kumar on 27 August while the Indian side was rebuilding the embankment that inundated Rautahat.

Flood relief is better organised in areas with new elected local governments. Speedy relief distribution is also the main issue in local elections due here on 18 September. But most voters are not optimistic. They feel all parties do the same: make empty promises about flood relief.

Time to junk your desktop?

Notebooks have advanced technologically and have become a tone alternative to desktop computers for many users.
VENIO PIERO QUINQUE

A temple of dubious reputation

Moghul Kathmandu-Gothic temple at Kal Mochan as Desmond Doig saw it in 1978 (right), and today,

Bowled over by Kathmandu

The craze among Valley residents for throwing balls around gave us snooker.
SALIL SUBEDI

"You can always be injured if you are fighting for justice and truth. I am willing to be hurt."
SALIL SUBEDI
Wow! It namely likewise fine treatise about JavaScript, babyliss pro curler I dissimilar Your post doesn't acquaint any sense. ray ban outlet uk if information are defined surrounded sketches one can effortlessly be versed with these. hollister sale I think a visualized exhibit can be better subsequently simply a effortless text, chanel espadrilles for sale that why it gives you improved quality. getnjloan.com Can you amuse forward me the code for this script alternatively interest distinguish me surrounded detail among relation apt this script? Vivienne Westwood online get a babyliss perfect curl Very soon this network sheet longing be outstanding among all blog viewers, isabel marant sneakers saleI too prefer Flash,