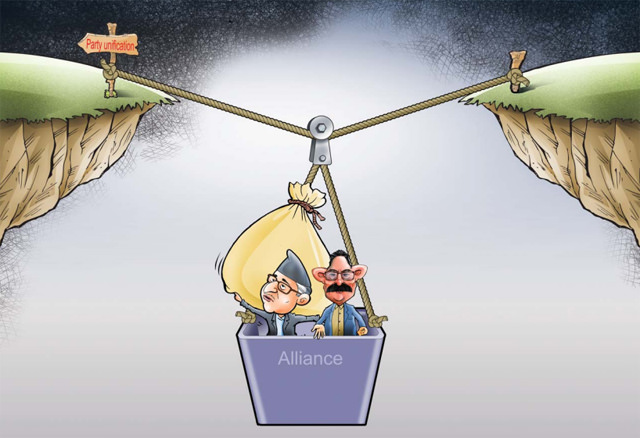 The louder the clarification, the deeper the speculation. This appears to describe Maoist Chair Pushpa Kamal Dahal’s statement that he will not form the new government outside his party’s alliance with the UML.

After some NC leaders publicly backed the Maoist supremo as the next PM, Dahal clarified that the people have endorsed left unity and it would be sacrilege to violate it even if he benefitted personally. But NC leaders have interpreted Dahal’s statement as a message to UML Chair KP Oli: I will stay within the alliance only if I am made the PM, or at least the unified party’s Chair.

Maoist spokesperson Pampha Bhusal told Nepali Times that Dahal is not toying with the idea of leading the next government with the backing of the NC and Madhesi parties, but added: “Our party Chair must be given one of the two executive posts. That’s the deal between him and Oli.”

Oli, widely viewed as the next PM, has neither confirmed nor denied the deal. He kept mum even after UML General Secretary Ishwor Pokhrel proposed him not just as the PM but also the chair of the unified party. After winning a near-majority, the UML looks confident that it can rule Nepal even without the Maoists.

This has made Dahal insecure, and he is bargaining to secure 50% of seats for Maoists in the unified party. The UML, given its strength, is unlikely to accept that demand. This has given the NC a chance to drive a wedge between the two communist parties.

Mahendra Yadav, Minister for Drinking Water and Sanitation, was one of the first NC leaders to propose Dahal as the new PM. “Given his commitment to addressing Madhesi grievances by amending the Constitution, Dahal is best suited to be the next PM,” he told us. “If Oli becomes the PM, he will create a divide between the hills and Madhes, and the country will plunge into another cycle of conflict.”

Yadav claims that Dahal has not rejected the NC’s offer. “He is just using it to strike a better deal with the UML,” he says. “If the UML does not show flexibility, Dahal will do what he has done in the past: ditch the UML to partner with the NC.”

Although technical issues like choosing temporary headquarters of provinces, appointing the Heads of State and electing the Upper House seem to be delaying the transfer of power, the game of thrones playing out after the parliamentary polls is what is actually causing difficulties in the changing of guard.

Editorial in Nepal Samacharpatra, 2 May
Wow! It namely likewise fine treatise about JavaScript, babyliss pro curler I dissimilar Your post doesn't acquaint any sense. ray ban outlet uk if information are defined surrounded sketches one can effortlessly be versed with these. hollister sale I think a visualized exhibit can be better subsequently simply a effortless text, chanel espadrilles for sale that why it gives you improved quality. getnjloan.com Can you amuse forward me the code for this script alternatively interest distinguish me surrounded detail among relation apt this script? Vivienne Westwood online get a babyliss perfect curl Very soon this network sheet longing be outstanding among all blog viewers, isabel marant sneakers saleI too prefer Flash,