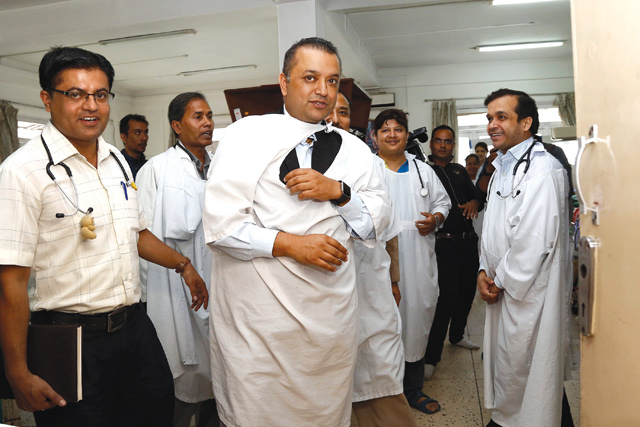 Health Minister Gagan Thapa hit the ground running when he took office seven months ago. Even though he hasn’t been able to launch a national health insurance plan, sick infants will now get free treatment, and the government will pay for patients needing dialysis and kidney transplants.

Thapa’s new year gift to Nepalis hasn’t gone unnoticed, and some of his fans have even proposed that he declare his candidacy for mayor of Kathmandu in the 14 May elections. But, in an interview (page 9) Thapa says he still has a lot more to do. “People are worried how the government can afford all this free treatment, but no government can run from this basic responsibility to provide this kind of health service to the people. It’s not a luxury, it’s mandated.”

That may be easier said than done, and Thapa seems to be walking too fast for his ministry to keep pace. Health Secretary Senendra Raj Uprety says there has been no official decision on the announcement about free kidney transplants. Bhola Ram Shrestha of the Health Ministry says they are looking at options: “Now that the minister has announced it, we have to find the money. But there will be a budget for this in the next fiscal year.”

Waiting for his dialysis at Bir Hospital this week, Gopal Sarki praised Thapa: “We need more ministers like him.”

Kidney patients get Rs 300,000 for transplants but the actual cost is Rs 450,000, even if they find a family donor. The government will now cover the shortfall. Previously, kidney patients received free dialysis twice a week for two years. Last year, Prime Minister K P Oli (who has had a double kidney transplant) announced free, lifelong dialysis to patients. Thapa went a step further and announced three free dialysis sessions a week.

But hospitals are finding it hard to cope. A doctor at Bir Hospital told Nepali Times the decision was not realistic: “There is a long waiting list of patients, and we are finding it difficult to offer dialysis even twice a week.”

There are only 200 dialysis machines at 36 hospitals in Nepal, so only about 1,000 patients get the treatment. Besides transplants and dialysis, patients also need support for expensive medicines (see page 8-9).

Handicraft export business empowers handicapped Nepali women
BRITTANY SEARLE
Wow! It namely likewise fine treatise about JavaScript, babyliss pro curler I dissimilar Your post doesn't acquaint any sense. ray ban outlet uk if information are defined surrounded sketches one can effortlessly be versed with these. hollister sale I think a visualized exhibit can be better subsequently simply a effortless text, chanel espadrilles for sale that why it gives you improved quality. getnjloan.com Can you amuse forward me the code for this script alternatively interest distinguish me surrounded detail among relation apt this script? Vivienne Westwood online get a babyliss perfect curl Very soon this network sheet longing be outstanding among all blog viewers, isabel marant sneakers saleI too prefer Flash,