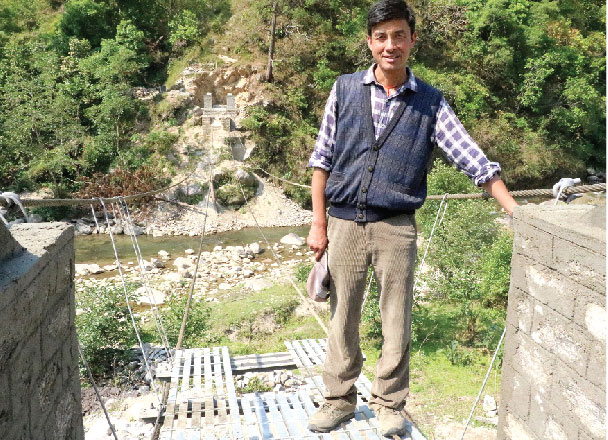 Lila Jirel (pic, above) is an engineer who used to work for the Dolakha District Development Committee (DDC). Restructuring in the new Constitution means his office is now called the District Coordination Committee (DCC) but he still has to oversee rehabilitation of this footbridge in the village of Phasku.

“Maybe if we have elected local leaders development will move faster,” Jirel says, a view echoed by villagers here.

The prospect of local elections has raised hopes that projects like this will benefit from enhanced accountability and speedier grassroots development. Just like this half-built footbridge, local democracy is a work in progress, and we will see if the new DCCs live up to the promise.

However, in Kathmandu there is considerable confusion about elections, and preparations have been overshadowed by uncertainty over the longevity of the coalition in the aftermath of the impeachment move by Parliament against Chief Justice Sushila Karki.

Bimalendra Nidhi has withdrawn his resignation and is again Home Minister, but Kamal Thapa’s RPP has quit the coalition and Bijaya Gachhadar’s Nepal Loktantrik Party (NLP) is threatening to do the same.

“The government has our support, but it is ignoring us on major issues, including impeachment and Constitution amendment,” says Shiva Lal Thapa of the NLP. “If the Prime Minister does not take us into confidence, we will withdraw our support to him.”

With the 37-MP RPP already out, the Pushpa Kamal Dahal government may fall if the 17-MP NLP also quits the coalition. The newly unified RJP Nepal, with 25 MPs, has promised to back the government if it is likely to fall, but only if the Constitution amendment bill is passed.

The governing Maoist-NC coalition and RJP Nepal have already agreed to fast-track the amendment bill, but still lack the numbers to do so. The RPP is divided, with its pro-monarchy faction pressing for rejection. Gachhadar’s party also opposes the bill in its present form.

So, staying in power with the support of Madhesi parties will not be a cakewalk for Dahal.

This week, nearly 44,000 people nominated themselves for 13,000 posts (mayor, deputy mayor, village council chief and ward committee member) that will be elected on 14 May in provinces 3, 4 and 6. But the government is on the brink of falling into a minority just when it needs to focus on one agenda: making elections a success.

And the second round of local elections on 14 June...that is still a huge question mark.