Crusading physician Govinda KC’s fast enters its 19th day on Friday. Even as his health deteriorates, Parliament shows no sign giving in to his demands to clean up the greed and corruption in medical education that keeps Nepal’s health care unaffordable and inaccessible to citizens.

This week, Parliament fast tracked the National Medication Education Bill 2016, but not in the way KC has demanded. He had wanted a 10-year moratorium on new private medical colleges, but the draft submitted to the Social Welfare Committee of Parliament to be tabled in the House on Friday does not meet that demand. 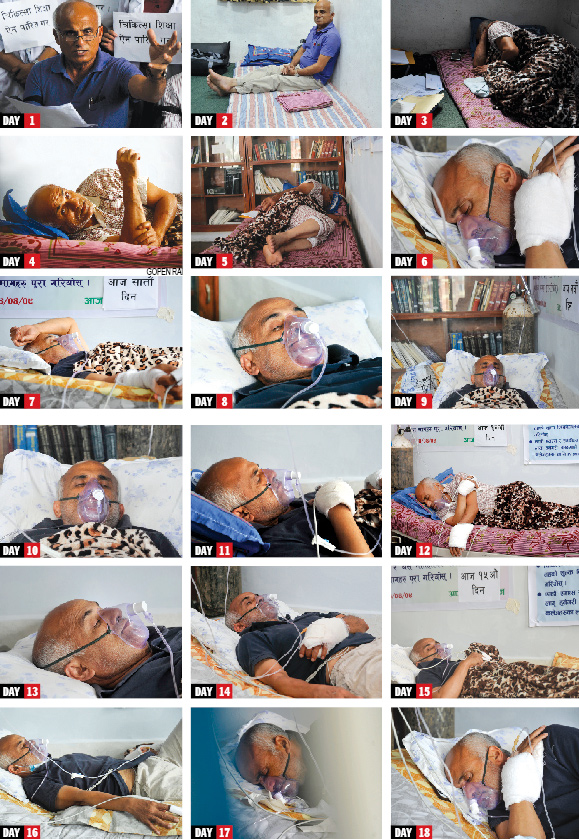 In fact, the taskforce is said to have added a clause to the bill allowing medical colleges which had already received their Letter of Intent and built infrastructure, to go ahead. If the bill is passed, at least five new medical colleges will spring up in Kathmandu Valley alone.

KC rejected the draft and his negotiators have refused to talk with the government. After 18 days without food and water on Thursday, the doctor is sinking fast. Physician Dibya Singh at Teaching Hospital warned: “He may pass out and need medical resuscitation at any time.”

Both the ruling and opposition party MPs reject KC’s demand, saying no one can infringe on the right of the legislature to pass laws. Sociologist Chaitanya Mishra agrees, but adds: “If owners of banks, private schools and private medical colleges pass bills in the guise of MPs it is not acceptable.”

Private medical colleges are either owned by politicians or have political protection. Given the scant disregard politicians showed towards another hunger striker, Nanda Prasad Adhikari who died during his fast in 2014, there is now reason to fear for Govinda KC’s life.

"The 7 parties have no agenda"

For an institution that saves so many lives, the Nepal Kidney Centre itself is struggling to survive
NARESH NEWAR
Wow! It namely likewise fine treatise about JavaScript, babyliss pro curler I dissimilar Your post doesn't acquaint any sense. ray ban outlet uk if information are defined surrounded sketches one can effortlessly be versed with these. hollister sale I think a visualized exhibit can be better subsequently simply a effortless text, chanel espadrilles for sale that why it gives you improved quality. getnjloan.com Can you amuse forward me the code for this script alternatively interest distinguish me surrounded detail among relation apt this script? Vivienne Westwood online get a babyliss perfect curl Very soon this network sheet longing be outstanding among all blog viewers, isabel marant sneakers saleI too prefer Flash,